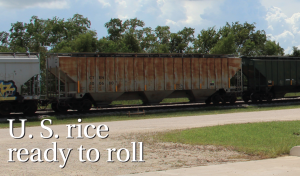 No cash bids being offered throughout the year can definitely be described as a “tight spot.” And when rice farmers find themselves in a tight spot, they don’t give up. That’s not their nature. Instead, they look for another alternative to sell their rice.

Several years ago, a small group of rice farmers in southwest Louisiana, who were faced with this situation, came up with an idea to send their rice to Mexico via rail. The inspiration for this thought was a rail facility located at the Lacassine Agri-Industrial Park that originally had been intended to carry sugar. Although that venture did not pan out, the property, infrastructure, spur and truck scales were all still there.

Mark Pousson, who is the manager of what is now the South Louisiana Rail Facility (SLRF) in Lacasinne, explains how Mike Strain – the Commissioner of Agriculture and Forestry in Louisiana – and Governor Jindal’s administration worked with them to “make something happen.”

“They gave us a long-term lease and helped us get things established,” Pousson says. “But, then, the state said we had to ‘put some skin in the game’ before the project could continue. Several presentations were made to groups of farmers, and, based on nothing more than a ‘maybe so and no guarantee’ about 160 farmers contributed roughly $800,000.

“The wonderful thing is that these farmers were standing up for their livelihood,” he adds. “The state of Louisiana stepped up to the plate and contributed another $5 million to help build an efficient rail loading facility.”

During this time, Dwight Roberts, president and CEO of the US Rice Producers Association, reported the following in Rice Farming magazine: “Resilience has always been a word to describe rice farmers,” he said. “And while faced with adversity in southwest Louisiana, a group of farmers there have shown their ability to take initiatives and give themselves a new market alternative.

“After more than two years of fund raising and planning, the South Louisiana Rail Facility, LLC recently began construction on a site near Lacassine, La., within the town’s Agri-Industrial Park,” Roberts noted. “The new facility will be owned by the Jeff Davis Parish Police Jury, who is leasing the operation to the South Louisiana Rail Loading Facility.

“Louisiana Department of Agriculture and Forestry Commissioner Mike Strain says, ‘This facility will be an important tool for loading Louisiana grain for export to world markets. This is a huge addition to the agricultural infrastructure for our Louisiana farmers. This project is a perfect example of a public-private partnership for economic development.’

“The facility will be highly efficient thanks to an excellent location on Interstate 10 that contains truck scales onsite and two one-mile rail spurs for 200 railcars from a previous project,” Roberts continued. “The facility has an elevator capacity of 25,000 bushels-per-hour with about 160,000 bushels of onsite storage. A 25,000 bushels-perhour Compuweigh rail scale to provide USDA certified weights and a Federal Grain Inspection Service grade room are also onsite. Dual, covered unloading pits allow trucks four minutes to discharge.”

‘A Golden Opportunity’
Bill Wild, who farms with his brother, Tim, in the Thornwell/Welch area, said they believed that south Louisiana could benefit from utilizing the market in Mexico.

“I’m not saying that it wasn’t being utilized,” he notes. “But we thought that if we had a modern, high-speed, high-capacity loading facility, it would provide a better marketing tool, or opportunity, to develop that market for the industry down here. The facility will handle multi-grains, along with milled and rough rice, so we just felt there was a golden opportunity there if we could get it done.”

Pousson said another important link in the marketing chain was to travel to Mexico to develop relationships with the Mexican buyers.

“We went to their farms, ate dinner at their grandparents’ homes, and they came to eat crawfish at our homes here in Louisiana,” he says. “We have developed a great relationship with about five or six of the buyers.

“We had significant help from Dwight Roberts with the US Rice Producers Association,” Pousson adds. “The success of this facility would not have happened without his contacts. Today, SLRF is in its third year of operation.

“We don’t have long-term storage here,” he says. “We position the rice for an order. When a customer places an order, we start bringing in the rice. Although we are a multi-grain facility, we serve the Mexican rough rice market right now and primarily source from our membership. However, if a non-member entity, like one of the big brokers, would like to use the facility, it is available.”

Currently, SLRF’s membership is made up of mostly local Louisiana farmers, but the facility also has members in Texas.

Identity-Preserved Rice
Pousson notes that the South Louisiana Rail Facility’s customers ask for specific varieties and are willing to pay a premium for them. He says that a lot of times the customer base requests CL111 for consistency of the kernel size, clarity, milling yield, amylose content and cooking characteristics.

“One of our customers has a lot of restaurant business, so cooking characteristics are very important to him,” Pousson says. “Our farmers identity preserve (IP) rice on their farms, so we IP rice at the facility all the way to the buyer. Our customers talk about their businesses improving because of the quality of the identity-preserved rice. As long as the quality and yield are there when they mill it, and if they are getting the best bang for their buck, then they keep coming back. Our customers do a repeat business.”

Traditionally, in southwest Louisiana, farmers identity preserve their rice in on-farm storage, and if they go to a commercial dryer, that facility keeps the rice segregated, too.

“It’s just the culture down here,” says Wild. “It’s the way my daddy did it when I was growing up. We cut a field, put it in the bin, dried it and sold it as a lot. We’re very landlord-oriented, so there are multiple interests to consider. It’s easier to handle the settlements if you keep everything separate.

“I IP all of my first crop rice,” he says. “It may slow down at the pit a little bit when you are dumping because you have to clean everything out, but it’s always been done that way here in south Louisiana. We can go to the buyers and tell them that this is exactly what we are going to give you. We’ll provide a sample, and you are not going to get a comingled lot. We can IP the rice and pretty well guarantee that this is what you are going to get. Obviously, there is a premium value in identity preserving rice.”

‘Well Worth The Investment’
Shannon Daboval, who has farmed rice in southwest Louisiana for the past 26 years, concurs.

“Most farmers realize the importance of keeping rice preserved by variety and are rewarded with higher prices for doing so,” he says. “In the past, we had heard from our customers in Mexico what they want and what they expect, so the rail facility is doing its very best to provide that since the buyers in Mexico are asking for specific varieties.

“In the beginning, each member invested $5,000 to get started with some funds, then the state contributed more money to help us build the facility,” Daboval says. “So far, the South Louisiana Rail Facility has been well worth the investment. And it looks like it is continuing to pay off.” 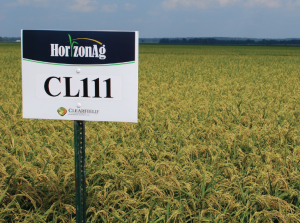 According to South Lousiana Rail facility manager Mark Pousson, identity-preserved CL111 has proved to be very popular with several of the rough rice buyers who are placing orders from Mexico. Following is some specific information about this Clearfield variety. CL111 was a grower favorite in 2014 and will be very popular again in 2015. CL111 provides excellent first- and second-crop yields and has excellent field tolerance to blast. CL111 is a preferred variety by domestic and export mills because it produces high-quality package rice year after year. CL111 is earlier than any other Clearfield variety; thus, it allows growers to spread out the harvest while still offering excellent yield potential. It has also been a favorite for ratoon cropping in Louisiana.