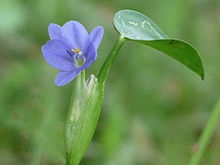 Monochoria vaginalis, a member of the water hyacinth family, has been found in California rice fields. It is not a native species.

Similar to the disease survey we did last month, University of California Cooperative Extension will be surveying rice weeds this fall. The survey implementation was funded by the Rice Research Board in 2019, and pending the results of the survey this year, we plan to repeat the survey every five years, similar to the ongoing disease survey, which is also repeated every five years.

The impetus behind the weed survey is due to the increasing numbers of new weed species that have appeared in the past several years: winged primrose-willow, weedy rice, monochoria and recently, one (possibly two), new watergrass species.

We are hoping that by conducting a survey, we may find some new species before they spread and better establish ranges for the species we know we have.

A crew of two people will be stopping in random fields in the major California rice-producing counties. We will take soil samples from the top 6 inches of soil in each field.

The soil samples will then be processed in a greenhouse at UC Davis, where the weeds will be grown out to identify each species present in the soil.

The reason we are surveying this way, instead of surveying during the rice-growing season, is due to the use of herbicides during the season. At that time, we would have difficulty seeing the presence of weed species that are well controlled by the herbicides.