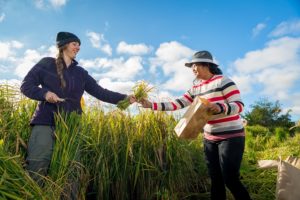 The University of Arkansas is leading a research group working to identify the natural genetic variations in rice that allows the plant to produce high-quality grain in an environment of rising temperatures.

The consortium of four universities recently received $4.65 million from the National Science Foundation to support their work. The team is studying the genetics of more than 400 rice varieties collected from around the world.

To address this issue, the team of researchers is studying the characteristics and genetics of the different rice varieties. Working with colleagues at the University of Arkansas at Little Rock, Oklahoma State University and Louisiana State University, they will compare the yield and quality of two groups of rice, one grown grown under heat stress and the other under ambient temperature.

By comparing the two groups , the researchers will be able to identify varieties of rice that produce high quality grains in spite of increased temperatures. This information will be used to map the genomes of the varieties to identify the gene sequences and expressions that give the plants this heat tolerance advantage.

The researchers will also use gene-editing techniques to validate their findings. With this information, they can make specific recommendations to plant breeders and farmers.