Where is Carl the greenskeeper when you need him? 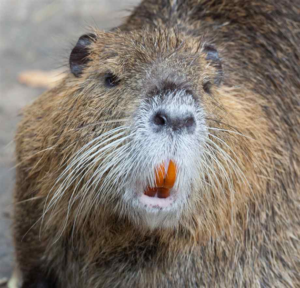 Bill Murray played Carl the greenskeeper in the immortal classic film, “Caddyshack.” Throughout the movie, the wily gopher challenged Carl, who was tasked with getting rid of the rodent because it was digging up the golf course.

In one of the more memorable parts, Carl played with figurines made of plastic explosive as he mused, “In order to conquer him, I have to think like an animal and whenever possible, to look like one. I’ve got to get inside this dude’s pelt and crawl around for a few days. Who is the gopher’s ally? His friend? The harmless squirrel and the friendly rabbit. I’m going to use you guys to do my dirty work for me.”

This very scene came up as I talked to a California grower about the recent discovery of a breeding nutria population in the Sacramento-San Joaquin River Delta.

The California Department of Fish and Wildlife has begun an eradication program, but even department officials admit it’s going to be a long battle.

Nutria, which can reach up to 20 pounds, are elusive aquatic rodents that are active mostly at night. They frequent dense vegetation near bayous, swamps and other waterways.

Females reach sexual maturity as young as 4 months old and can have three litters of four to 13 young each time in a year. Needless to say, they breed like the proverbial rabbit. As of Oct. 18, the state had trapped 310 nutria in six different counties.

Nutria are native to South America and were imported into the United States in the early 1900s to raise for fur.

The rodents are now endemic to Louisiana and are responsible for denuding much of that state’s Gulf Coast of natural vegetation that used to protect against erosion and land loss.

The Sacramento-San Joaquin Delta is a maze of below-sea-level islands protected by levees. If nutria were to burrow into these levees, they could comprise the structures, causing levee breaches and massive flooding.

The producer I was talking to also has problems with beavers building dams and hires someone licensed to dispatch them. He jokingly compared the animal damage control person to Carl, saying that to control the beaver, you must first think like one. In all seriousness, the producer said the animal damage control person was very knowledgeable about the ways of the rodent, enabling him to successfully control it.

As our conversation moved onto nutria, which some have dubbed a “giant swamp rat,” we both agreed that the state really needs some surveyors and trappers like Carl, who must think like the nutria to conquer it.

Let’s just hope if the state finds some, they don’t use explosives like Carl did in the movie’s finale.