Weary of another wet winter, Arkansas rice growers watch for a dry window 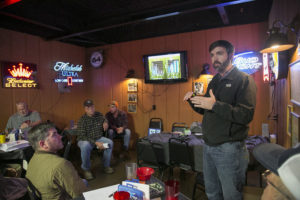 When it comes to deciding between planting rice, soybean or other crops in 2020, it’s not just a question of markets and futures contracts. For many growers, it’s a question of when the ground will be dry enough to work.

The winter of 2019-2020 bears a striking resemblance to that of the previous year in that persistent, intermittent rains have saturated soils with no chance to dry out long enough to move in heavy equipment for the fieldwork needed before spring planting.

Jarrod Hardke, University of Arkansas Extension rice agronomist, said one bright, if not ironic, spot may be that the mass of prevented planting in the 2019 growing season did at least leave some fields prepared for planting in 2020.

“If you see yourself a field ready for planting right now, chances are that happened last summer,” he said.

The wet weather has also made it more difficult and time-consuming to provide accurate recommendations based on soil testing.

“A large percentage of the samples that came into the soil testing lab this year were pretty muddy,” Hardke said. “A big concern with a wet sample is that it’s harder to be precise in your depth. The process also takes longer, because those samples take longer to dry out before they can be tested.”

In late May of 2019, the Arkansas River flooded, causing a major levee break near Dardanelle. The Lollie levee in Faulkner County topped, but managed to hold.

“It won’t take another flood like last time to come over that levee,” Lawson said. “People are concerned about it.”

While soybeans typically present a reliable planting alternative to rice, continually depressed commodity prices have made it less attractive in the River Valley and elsewhere. The signing of the first phase of a trade agreement with China initially raised hopes of a revitalized export market for the state’s No. 1 crop.

But soybean and grain markets fell Wednesday night as reports that the spreading coronavirus may reduce China’s overall demand for agricultural products.

Lawson said that while growers will naturally gravitate toward the best market prices when allocating their crop land for planting, he advised them to stick with their regular crop rotations for the sake of their long-term viability.