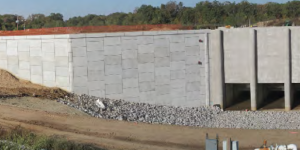 Leonardo da Vinci once said, “Water is the driving force of all nature.” Even today, this statement holds true, especially for rice production in the United States. The presence of too little or too much water influences rice acreage and, in some cases, the way farmers approach production practices.

In Texas, rice farmer Ronald Gertson, with the Colorado Water Issues Committee, works tirelessly looking for solutions to water availability for rice in a state plagued by drought for three years in a row. This is how he describes the water situation right now.

In 2014, almost 50,000 acres will not receive water from the Lower Colorado River Authority, the traditional supplier of water for rice. Three years ago, Gertson noted that 55,000 acres were left wanting for water, but since that time, about 5,000 acres have been able to develop some groundwater to continue planting, he said. Also, in the Brazos River Basin, farmers recently heard that another 16,000 acres were not going to receive water as a result of the drought situation in the Brazos River. 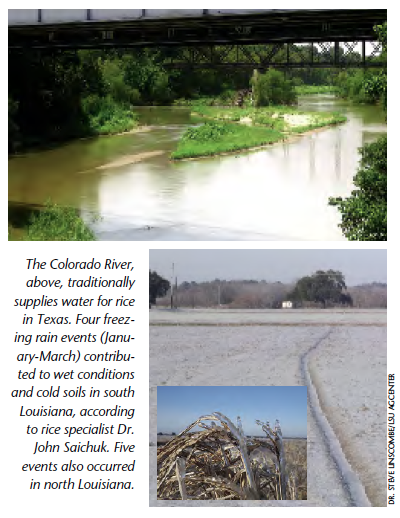 “The Brazos and Colorado Basins are the two areas where shortages are impacting rice acreages,” Gertson says. “Those two basins also happen to be where over half of the rice is grown in Texas. So, between the two, 66,000 rice acres will not be planted this year, which is roughly one-third of the Texas traditional rice acreage in the last decade.

“This decrease in rice acreage is a big deal for us here in Texas, because we are at a critical place with regard to our infrastructure,” he adds. “We could be down to about 120,000 acres of rice statewide, and a good percentage of that production is going into hybrid seed rice, which doesn’t leave a lot for our mills to survive on.”

Although Gertson says drilling wells is an option, the Texas rice farmer notes that this year is going to be a determining factor as to whether the local aquifer can handle the considerable extra burden that has been placed on it by the tremendous growth in ground water development, particularly in three counties along the Gulf Coast. Plus, the capital expenditure of drilling wells is phenomenal.

As far as planting another crop besides rice, Gertson says this really is not an option because more than two-thirds of the land on the Gulf Coast that has traditionally been rice land is totally unsuitable for almost any other crop.

Water-seeded acreage may increase this year if field conditions prevent some farmers from drill seeding their rice.”

Off-Channel Reservoir In The Works

Gertson points out that the Lower Colorado River Authority (LCRA) does have plans for developing an off-channel reservoir in and amongst the rice-growing area that could have some limited, positive impact on water availability for rice. It will be a 1,500-acre pond capable of holding 25 feet of depth. A 30,000-acre feed of water can be stored in this off-channel reservoir.

“The concept is that when rains enter the river system below the last dam, which is about 150 river miles upstream, LCRA will pump that water out and into this off-channel reservoir so long as the river is up and running,” he says. “Their estimation is to have it completed to begin holding water in 2017. Site preparation is coming along, and I expect that within the next six months, construction will begin.” 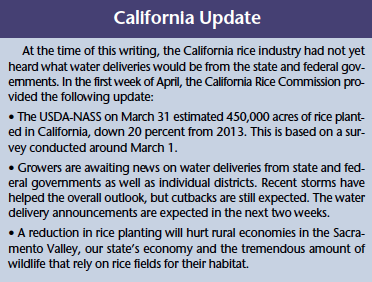 According to the US Army Corps of Engineers, Memphis District, “The Grand Prairie Area Demonstration Project (GPADP) is a comprehensive water management plan designed to protect and preserve the Alluvial and Sparta Aquifers. This project also allows the continued irrigation of current agricultural crops and reduces further depletion of ground water aquifers, while continuing to provide critical benefits for the millions of waterfowl, which annually migrate through the region. The project utilizes excess surface water and water from the White River to supplement a network of on-farm tailwater recovery systems. This supplemental system will be used to fill on-farm reservoirs that store the water, which supplies at least a portion of each farmer’s irrigation needs.”

Dennis Carman, chief engineer and director of the White River Irrigation District in Arkansas, emphasizes that the project takes a small amount of excess water from the White River.

More details about the funding, contracts and progress of the GPADP will be reported in the May issue of Rice Farming.