Through the eyes of a child 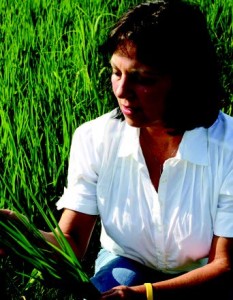 When I was a kid, Sunday afternoons were reserved for the family piling in the truck and driving out to the farm in east-central Louisiana to look at the crops. At that time, I had two sisters – Kimberly and Anne – and I was the oldest. Our baby brother Wes had not been born yet.

We drove down turnrow after turnrow as Dad pointed out the different crops and explained what they were and how they were progressing, depending on the time of the year. Even though it was dryland, I remember the beans looking tall as trees to me later in the season. The varieties had not evolved into the more compact, higher-yielding plants that they are today. And, through our eyes, the equipment looked huge although, it, too, was not nearly the size of today’s tractors, planters and combines.

Dad didn’t grow any rice because the land he farmed wasn’t suited to it. He planted mostly beans, milo and, later, some cotton. But no matter what crop was in the field, his point was to share his love of agriculture with us and help us understand what he did all day and how important it was in the big scheme of things.

Since we didn’t live on the farm, I suppose we were technically “city kids,” if, by some stretch of the imagination, you can call the small town where I grew up a city. Mom and Dad wanted us to enjoy being out on the farm, so they threw in a surprise one day – a quarter horse named Mr. Lawman, which Dad taught us how to ride. I immediately claimed it as mine since I was the oldest although I did share rides with my sisters. They later got horses of their own – Preacher and Sunny. When my brother came along, he wasn’t so much interested in riding a horse as he was in riding, and later driving, the equipment.

I’ve forgotten a lot, but I’ve never forgotten the days that I spent on the farm as a child. I was reminded of those magical times while observing Christian and Julie Richard’s children running through the newly planted rice field, which is just steps away from their back door, and stopping occasionally to dig up a rice seed to show me what their Daddy had planted. Two-year-old Saul could name every piece of equipment in sight, and fouryear- old Katherine helped mix up the rice pancakes that would be the dessert for the upcoming crawfish boil that night. Six-month-old Landry seemed content in his stroller, but you could tell that he was taking in everything, too.

As Julie Richard notes on page 9, “That time [spent out on the farm] is important for these three kids to not only see what we are doing but to be able to spend good interactive time with us. They will have their own set of memories one day. I hope that no matter what they do, they carry with them an appreciation of where their food and fiber originates and help to share it with others.”

I personally think that everyone would have a better appreciation for agriculture if they could only see it through the eyes of a child.