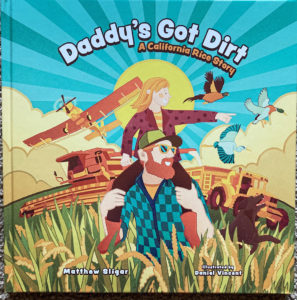 The cover of “Daddy’s Got Dirt,” a children’s book written by rice producer Matthew Sligar

About three years after Sligar came up with the idea and began work on “Daddy’s Got Dirt – A California Rice Story,” the book is now on local store shelves and available for sale online.

So far, it tops the best seller list for at least one 4-year-old critic – Sligar’s older daughter.

“She calls it her rice-field book,” he said. “She loves it.”

The nightly ritual at the Sligar household in Gridley, California, involves reading two books to his daughter before she goes to sleep. One is always the rice field book.

“She has five or six favorite books, but this book is read every night, and she knows I enjoy reading it to her,” he said.

And it was this nightly ritual that first planted the seed in Sligar’s mind about writing about one of his passions – rice.

“I was reading about little blue trucks and giraffes that can’t dance, but I certainly wasn’t reading about rice and how rice was grown,” he said.

Sligar’s wife, Clara, used to sing to their daughter about her family in Brazil so she’d stay connected. That inspired Sligar to sing about rice.

“I thought I would make up a song about rice, and it became the rice field song,” he said. The idea was to help his young daughter understand why dad wasn’t home a lot, especially during harvest.

The song got Sligar thinking, particularly while spending long hours on the combine during the 2017 harvest.

“I would turn that song into a children’s book,” he said. “I had a dictation app on my phone. I just started dictating four-line stanzas and verses for a children’s book. By the end of harvest, I essentially had a children book written.” 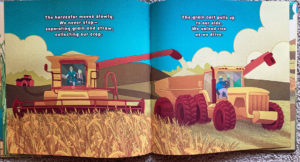 Writing the book was the easy part. Finding an artist who could translate author Matthew Sligar’s prose into colorful representations was the tough part.

But writing the book was the easy part. Then came finding the right artist who would translate those words into images that reflect the richness of rice fields.

“I really think children’s books are 80% illustration,” said Sligar, who has read his share to his two daughters. “That’s what really is going to catch somebody. I wanted to create this world where you really felt like you were on the farm, and it wasn’t just a series of pictures that were disjointed.”

To his credit, artist Daniel Vincent was able to take Sligar’s prose and translate them into colorful art that tells the story of how rice is grown for both young readers and their parents.

Although the illustrations may be slightly reminiscent of the colorful rock ‘n roll posters and album covers of the 1960s and ‘70s, they also portray rice production in a realistic fashion. Combines, disks, tractors, aerial applicators and grain carts are all featured.

If you’ve ever watched one of Sligar’s videos on his YouTube channel, RiceFarmingTV, you’ll recognize his red beard, baseball cap and sunglasses in the children’s book. Also featured in the book are some of the critters who make guest appearances in his videos, like the crawfish, the bunny and waterfowl.

“Daddy’s Got Dirt” is available at “Made in Chico” gift shop, which sells locally made items in Chico, California, or online at ricefaringtv.com.