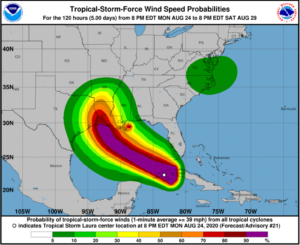 Laura is predicted to push into Arkansas before turning northeastward toward Missouri, Mississippi and Tennessee — map courtesy NOAA

High winds and heavy rainfall from what forecasters expect will be a major hurricane — Hurricane Laura — will likely sweep through most of Arkansas by Friday, just as harvest nears for several major crops across the state.

Laura is predicted to push into Arkansas before turning northeastward toward Missouri, Mississippi and Tennessee. The National Weather Service office in Little Rock said Laura was likely to maintain tropical storm-strength-winds of 30-40 mph and that gusts could briefly exceed 50 mph.

While the rice harvest is set to begin in northern Arkansas, the corn harvest throughout the state has already begun for producers with grain drying capabilities.

As of Aug. 23, the U.S. Department of Agriculture reported about 5% of the state’s approximately 640,000 acres had been harvested. Jason Kelley, Extension wheat and feed grains agronomist for the University of Arkansas System Division of Agriculture, said much of the state’s corn crop is in a vulnerable state.

“The timing is terrible, to be honest,” Kelley said.

While some corn producers in the state began harvesting as early as Aug. 1, Kelley said that those first three weeks of harvest were mainly limited to producers who have access to grain dryers.

“If you don’t have a way to handle corn above 15% moisture, there’s not much you can do prior to the tropical storm arrival, since most commercial grain terminals only want dry corn,” he said. Much of the state’s 2020 corn crop was planted late due primarily to wet conditions throughout March and April.

Listen to the Mississippi Crop Situation Podcast as Bobby, Jason and crew discuss the tropical storms’ impacts on Delta crops at https://podcasts.apple.com
As with many crops in the state, lodging — the phenomenon of crops becoming first saturated with rain and then blown down in high winds — poses the most likely threat at this point.

“Getting a big storm at the very end here isn’t ideal,” Kelley said. “But the big concern is that we get wind with it, which could cause lodging. When corn blows down, you’re just never able to get it all picked up and into the combine.”

Even lodged corn plants that can be recovered may suffer significant yield and grain quality loss, he said. The situation can be even more dire for grain sorghum, which, although not currently grown on substantial acreage in Arkansas, is ready for harvest this week.

“The problem with sorghum is that if it’s 80 degrees and it rains for 24 hours, the grain quality suffers — you’ll see sprouting in the head,” Kelley said. “We’ve seen this before in grain sorghum — we get these tropical rains, and the grain begins sprouting, and a very good crop can become unmarketable very suddenly.”

Additionally, heavy rains one week can make for muddy fields the next, even if the storm passes.

According to the National Oceanic and Atmospheric Administration, all but the northern 25 percent or so of Arkansas stands a 10% to 30% chance of receiving tropical-storm-force winds between now and Sunday, Aug. 30. NOAA also forecasts all of the state receiving at least 2 inches of rain by the end of the week, with some spots receiving up to 10 inches of rain.

Jarrod Hardke, Extension rice agronomist for the Division of Agriculture, said that as with corn, lodging in rice poses a significant challenge in harvesting rice. Arkansas is the nation’s leading producer of rice.

“As a general rule, some high winds at this time of year don’t bother me a great deal, as most of our cultivars stand pretty well,” Hardke said. “And some rainfall doesn’t really bother me though it does make for muddy harvest conditions and ruts. The concern is higher winds with rainfall, which turns into a heavy hand that can lay rice down and cause severe lodging.”

Depending on the severity of the lodging, producers could be looking at a much slower harvest and a reduction in yield, he said.

Jeremy Ross, Extension soybean agronomist for the Division of Agriculture, said storm-related lodging also poses a potential problem for the state’s No. 1 crop.

“Most of the soybean crop is in mid- to late-reproduction,” Ross said. “At these growth stages, the crop can withstand some ‘lean’ to the plants, but we don’t want to see plants completely flat on the ground. Most of the state is dry, so we could use some rainfall to help finish out some of the early planted crop.

“We don’t need excessive amounts of rain that could potentially cause flooding in low-lying fields and the lower ends of fields that typically flood with large rainfalls.”

Cotton, which is slightly ahead of the five-year average for crop progress with bolls open on 25% of the state’s 500,000 planted acres, still has more than a month before most harvesting efforts will begin. Bill Robertson, Extension cotton agronomist for the Division of Agriculture, said a thorough wetting this week will, if nothing else, help cotton growers struggling with decisions regarding termination dates for irrigation.