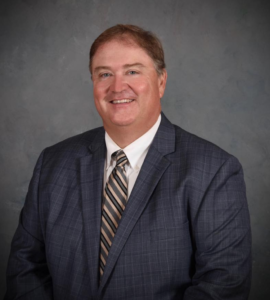 The International Rice Festival in Crowley, Louisiana, has named Alan Lawson of Crowley as its Farmer of the Year.

A graduate of Crowley High School, Alan attended Louisiana State University Eunie before transferring to LSU in Baton Rouge, where he received a bachelor’s degree in agricultural business. After graduation, he returned to the farm to join his father, becoming the third generation in his family to farm.

Alan’s grandfather grew up in Hammond and lost his father at a young age. His uncle, Will Lawson, was a Crowley businessman and was instrumental in helping his grandfather earn a degree in electrical engineering from Purdue University.

After college, he was able to purchase a farm in Crowley and moved there in the late ’30s to begin growing rice. Alan’s grandfather bought one of the first combines in the area and built his own farm drying and storage facility.

The facility has been expanded many times through the years and has grown from the original 3,600 barrels to over 50,000 barrels today as the farm size has continued to grow.

A&L Lawson’s operation currently consists of 1,100 acres of rice, 1,100 acres of crawfish, with a small number of acres of soybeans and a small herd of cattle.

The rice acres are primarily long grain. Currently he has CL111, CL153, CLXL729, CLXL745, Mermentau and Provisia varieties. Conserving natural resources is a high priority, and his preferred method of planting is to no-till into a stale seedbed.

Alan has recently partnered with two other crawfish producers to construct a crawfish peeling and packaging business, Bocage Crawfish. This operation allows Alan to market 100% of the farm’s crawfish production whether it is live sales to restaurants or peeled and frozen tail meat.

The operation also buys crawfish from other local farmers and employs over 50 people.

He also was selected to receive the Farm Credit Leadership Award and currently serves on its Young Farmers and Ranchers Advisory Committee. In addition, Alan is a 4-H volunteer and helps with the shooting sports program.

Born and raised two miles north of Crowley on his family farm, Alan is the oldest child of Larry and Marilyn Rodgers Lawson and has two sisters: Christine Lawson Gill and Elizabeth Lawson Monk.

Alan is married to Carey David Lawson from New Roads, and they have two children, Colin and Lillian. Carey works as Executive Director of LSU at Eunice Foundation in Eunice.

The International Rice Festival provided information for this article.