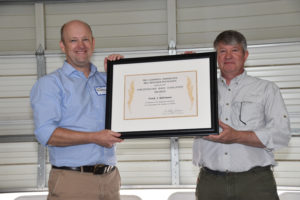 Cliff Rehermann, (left) son of Frank Rehermann, accepts the California Rice Industry Award on behalf of his father, who was not able to attend. California Rice Commission President and CEO Tim Johnson made the presentation — photo by Vicky Boyd

In presenting the California Rice Industry Award, CRC President and CEO Tim Johnson described the numerous trips Rehermann made to Washington, D.C., to advocate on behalf of California rice growers.

“When he wasn’t going to D.C., he brought D.C. here,” Johnson said during his presentation at the annual California Rice Field Day.

In fact, photos of Rehermann and then-Sen. Barbara Boxer, D-CA, raised some eyebrows because of her support of many liberal policies. But she also was a strong advocate for the state’s rice industry at times, Johnson said.

As someone who focused on leading by example, he had a straight forward leadership style that allowed everyone to be heard and no one to be maligned, Johnson said.

A Navy veteran, Rehermann also was a big fan of classic rock and roll and loved to talk about the concerts he attended, including the five times he had seen the Rolling Stones.