Arkansas Century Farm Applications Due May 31

The Arkansas Agriculture Department would like to remind potential applicants that it is accepting applications for the 2015 Arkansas Century Farm program. The program recognizes Arkansas’s rich agricultural heritage and honors families who have owned and farmed the same land for at least 100 years. The program is voluntary and places no restrictions on the land. Since the program’s inception in 2012, 239 farms have been certified as Arkansas Century Farms.

To qualify for the program, farms must meet the following criteria:

• The same family must have owned the farm for 100 years by Dec. 31, 2015. The line of ownership from the original settler or buyer may be through children, grandchildren, siblings and nephews or nieces, including through marriage and adoption.

• The farm must be at least 10 acres of the original land acquisition and make a financial contribution to the overall farm income.

Arkansas Governor Asa Hutchinson says, “The family farm is an Arkansas tradition – a way of life for generations of hard-working folks and a precious resource for all. In honoring those families who are part of this great tradition, the Arkansas Century Farm Program recognizes the historical relevance of the family farm and its important place in Arkansas’s future.”

Qualified applicants will be presented with a personalized metal sign and a certificate. Only the legal owners of the land may apply. There is no cost to apply for the Arkansas Century Farm program. Call (501) 683-4851 to obtain an application or visit this website: www.aad.arkansas.gov/Pages/programs. aspx. Applications must be postmarked by May 31, 2015, to be eligible for designation in 2015.

Emergency drought legislation introduced at the state capitol on March 19 underscores the ongoing crisis facing California’s rural communities, according to the president of the California Farm Bureau Federation.

CFBF President Paul Wenger thanked Gov. Brown and legislative leaders for their attention to the crisis and urged the state to move quickly to provide aid to rural residents whose livelihoods have been harmed by water shortages. Wenger also encouraged the state to move as quickly as possible to approve and build new water storage.

“Many California farmers face water cutbacks of 80 to 100 percent, and water shortages will force hundreds of thousands of acres of productive farmland to be idled,” Wenger said. “Tens of thousands of jobs will be lost on farms and in packinghouses and other rural businesses. People who work in those jobs form the backbone of our state’s rural economies. We appreciate the state’s efforts to help them through this difficult time.”

While tackling the short-term crisis, Wenger said, the state should also improve management of existing water infrastructure and adapt it to meet future needs.

“We need to have the reservoirs in place to capture more of those heavy rain flows, especially if we can’t count on the Sierra snowpack,” he said. “This winter, millions of acrefeet of water flowed to the ocean that might have been captured for later use.”

Wenger noted that California voters made it clear they want the state to build new surface storage, through their passage of the Proposition 1 water bond last year.

According to the Louisiana Farm Bureau’s May 4 President’s Column, farmers and ranchers are eager to use airborne drones to improve their businesses, but they need flexibility to use these tools to their full potential.

The AFBF told the Federal Aviation Administration this in comments focusing on performance-based standards. The comments were part of the FAA rule on the “Operation and Certification of Small Unmanned Aircraft Systems.”

In his comments to the FAA, Dale Moore, AFBF executive director of public policy, said farmers and ranchers have increased their yields while reducing their environmental footprint, thanks to advances in precision agriculture.

“Drones are the next evolution in American agriculture,” Moore said. “Used properly, they let us grow more food on available land using less water and fewer pesticides. Hightech cameras and other airborne sensors give us important tools with which to reduce erosion and keep agricultural runoff to the absolute minimum.

“Farmers need performance-based standards for drone use that promote innovation while keeping safety a top priority. For all the good they do, new technologies are not without risk,” Moore added. “Producers need to be able to manage these tools assured that their farm data is secure and cannot be used unfairly against them.

“Farmers and ranchers are ready to unlock the potential of new technologies in agriculture,” Moore said. “We’re hopeful that the FAA’s final rule gives them a key to do that safely and quickly.”

On June 30, 2014, the Mississippi Department of Environmental Quality (MDEQ) announced that the initial five percent phase of the voluntary metering program supported by the Delta Sustainable Water Resource Taskforce was met. The next milestone is to reach the additional five percent goal in each county by the end of 2015.

Currently, there are roughly 500 additional meters that need to be installed to fulfill the requirements of the voluntary program across the Delta.

MFBF President Mike McCormick stated, “As we met our initial five percent goal by the June 30 deadline, we continue to pursue reaching the remaining five percent mark by December 2015. Farm Bureau policy supported a voluntary approach to collecting this information about our water use.

“We supported the proposal for a voluntary program offered by the Delta Sustainable Water Resource Taskforce, and farm leaders in the Delta followed through on that agreement. This proves that in working together the Delta can unite toward a common effort. Farm Bureau and other organizations on the Taskforce continue to focus attention on reaching the other half of our metering goal and promoting water conservation measures and programs at every opportunity.”

Cochran stated, “We had a good dialogue with officials from RMA about key issues concerning insurability in regard to several rice production irrigation management practices. I believe we provided RMA with information needed to move forward to include these practices in policy. We will be providing additional on-farm data with the help of the MSU Extension service to RMA as well.”

An accomplished rice grower, a veteran conservationist and a pioneer in ag aviation were inducted into the Louisiana Agriculture Hall of Distinction, which annually honors individuals who make extraordinary contributions to Louisiana agribusiness.

The 2015 inductees were Jimmy Hoppe of Jeff Davis Parish, Lucien Laborde of Hamburg in Avoyelles Parish and Edwards Barham of Oak Ridge in Morehouse Parish who was honored posthumously. 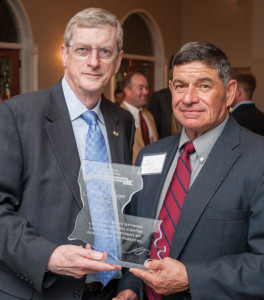 Hoppe, who retired from farming in 2012 and now runs a specialty rice-packaging business, was recognized for his long list of accomplishments as a rice grower. Known for his advocacy of sustainable practices and efficient use of resources, Hoppe was named U.S. Rice Farmer of the Year in 1999.

He is also known for his contributions in cutting-edge agricultural research and working with the LSU AgCenter Rice Research Station.

The Hall of Distinction is presented by Louisiana Radio Network in conjunction with the Louisiana Department of Agriculture and Forestry and the LSU AgCenter.

From the other side of the world, Clemson University’s Kendall Kirk can activate a fan on his grain bin in Blackville that could prevent thousands of dollars in lost crop value. The automated grain bin can sense an overnight dip in humidity and shut off the fan to avoid over-drying the grain. The fan turns back on automatically if temperatures and moisture levels call for it. Kirk, meanwhile, can sleep soundly knowing the value of his grain is protected.

Automated bins also reduce the chance of accidents by limiting the need to enter bins to identify problems. Farmers store grain to hedge market prices, as well as to keep harvests on schedule even if freight transport is unavailable. Improperly stored grain can be damaged by mold, insects, condensation and other factors. Too much moisture can lead to mold, while excessive moisture loss causes grain to lose weight and value.

“The manually managed grain bins will never be able to optimize grain shelf life the way an automated bin can,” Kirk says.

It’s important to continue to scout fields throughout the entire season because weeds missed in a pre-flood herbicide application can reduce yield post-flood if they are not effectively managed. Aquatic species in particular thrive post-flood. They generally are found in thin stands of rice and water-seeded fields. Establish a solid rice stand to reduce the potential number of aquatic weeds, as well as the potential for diminished yield caused by direct competition for nutrients, sunlight and moisture post-flood.

Grasp Xtra herbicide can be applied up to 60 days pre-harvest. With two modes of action Grasp Xtra delivers strong broad-spectrum control of weeds, including barnyardgrass, morningglory and aquatic species that break through pre-flood applications in conventional and Clearfield production systems.

Clincher SF herbicide also is a strong option for post-flood weed control in fields with barnyardgrass and sprangletop escapes, Walton says. Growers can apply Clincher up to 60 days preharvest for control of a wide spectrum of grasses.