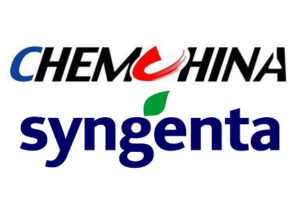 ChemChina and Swiss-based Syngenta AG have agreed to divest three types of pesticides to settle Federal Trade Commission charges that their proposed merger would harm competition in several U.S. markets.

The European Union made a similar announcement concerning the mergers of the two companies and proposed divestitures.

The proposed settlement requires ChemChina to sell all rights and assets of Adama’s U.S. paraquat, abamectin and chlorothalonil crop protection  business to California-based AMVAC. Adama is ChemChina’s wholly owned subsidiary based in Israel.

• Paraquat, an herbicide used mainly as a burn-down. Syngenta markets it as Gramoxone. Adama markets a premix of paraquat and diuron as Bobcat Combi WG.

• Abamectin, an insecticide used mainly in citrus and fruit tree crops to control mites, phyllid and leafminers. Syngenta markets it as Agri-Mek, Adama as Abba.

• Chlorothalonil, a fungicide used mainly on peanuts and potatoes. Syngenta markets it as Bravo, Adama as Radial.

Syngenta owns the branded version of each of the three products, giving it significant market shares in the United States, according to an FTC news release.

ChemChina, through Adama, focuses on generic pesticides and is either the first- or second-largest generic supplier in the United States for each of these products.

For paraquat, Adama is currently the second largest supplier behind Syngenta and another generic company. Post-acquisition, the combined share of the two firms would have been more than 60 percent.

Adama is the generic market leader for abamectin and has been for some time. Post-acquisition, the combined share of the two firms would have been close to 80 percent.

Adama is the second largest generic supplier of chlorothalonil. Post-acquisition the two firms’ combined share would have been more than 40 percent.

There are a number of other generic providers of  paraquat, abamectin and chlorothalonil. But the FTC found they would have been largely unable to gain sufficient share to rival the scale and market position Adama holds for these three products.

The FTC complaint alleges that without the proposed divestiture, the merger would eliminate the direct competition that exists today between ChemChina generics subsidiary Adama and Syngenta’s branded products, according to the FTC. The merger would also increase the likelihood that U.S. customers buying paraquat, abamectin and chlorothalonil would be forced to pay higher prices or accept reduced service for these products.

The public has until May 4 to comment on the proposed divestiture.