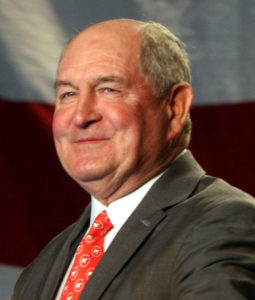 The U.S. Senate confirmed former Georgia Gov. Sonny Perdue as the secretary of agriculture, April 24, on an 87-11 vote.

As head of the U.S. Department of Agriculture, Perdue will be in charge of a staff of about 100,000 employees. He also enters the position just as development of the 2018 Farm Bill is beginning.

At the same time, the Trump administration has proposed cutting $4.7 billion from the USDA’s budget, or 20 percent of discretionary spending. The proposal, referred to as the “skinny budget,” is short on details.

Perdue’s confirmation marks the first time a Southerner has been in the role for more than two decades. The son of a Bonaire, Ga., farmer, George Ervin “Sonny” Perdue brings an ag business background into the job, having owned several ag-related businesses. But he is not related to the poultry producer, Perdue Farms.

Perdue is getting a late start at the job, having been nominated just before President Donald Trump was inaugurated in January. Part of the delay was due to ethics questions surrounding his business holdings. He eventually agreed to step down from several companies to avoid conflicts of interest.

He also enters the USDA without more than 200 other political appointments that Trump has yet to make.