Criss Jami, an American poet, essayist and existentialist philosopher quotes, “Unlike wealth, there is an infinite value in legacy.” And a family legacy in the form of a life-giving grain such as rice, is the epitome of immeasurable worth.

“I’m a fourth generation rice farmer,” says Derek Scofield, who, along with his brother Bart and their spouses, farms 1,200 acres of rice between Grimes and Arbuckle, Calif. “Our legacy in rice began with our great grandfather who had a mule team that was hired to cut levees and drains. Once the land had been reclaimed and was able to produce rice, the landowners needed farmers. Our great grandfather got his start that way, and everybody in the family since has followed that procession. We have leased land from some other families in the area for over 75 years. Our goal is to keep rice production viable for ourselves and our custom farming clients.

“My grandfather on my father’s side grew 44 rice crops in his life,” Derek continues. “He spent the majority of his life after World War II in rice production in the Arbuckle area. A big part of why our family comes back here is because there is that history.”

Derek and Bart, who has his Qualified Applicator License, got their start in farming through equipment. They did custom work for quite a few years before they found their own land to lease. Today, in addition to keeping up with their own rice farming operations, the brothers still custom farm primarily for farmers who don’t want the capital investment of owning and operating their own equipment.

One piece of machinery that Derek and Bart use on their own farms as well in their custom farming operation is a locally made Sweco Super 12 (pictured below). It’s called a bankout and unloads the harvesters and dumps them into the sets of doubles on the trailers. The tracks also allow them to cut rice in any conditions.

Derek and Bart also do a lot of their custom harvesting with four Hardy Harvesters. These machines were built locally in the 1960s and are designed specifically for rice. Each machine has two engines. The back engine operates the tracks and the drive train. The front engine runs the separator and the cleaning process.

“As you pull into deep mud with a conventional harvester, rice quality goes down because the separator is slowing down,” Derek says. “With the Hardy machines, the back engine can be revved up without affecting the separating process. The front engine is still running at 1,600 rpm. These machines are light and stay on top of the ground and can lean back to climb out of the mud. A conventional harvester has to stay flat, so it begins to push the mud and can only go so far because it gets stuck behind the wall of mud in front of it.”

The Scofield brothers’ two newest tractors are Case IH models, a 600 and a 350. Derek says the 600, with a large scraper that can be attached to it, works really well for land leveling.

“That’s why we went oversize on the 600 to make sure that we have plenty of power to pull our leveling equipment. When we are not land leveling, we can chisel and disk with it as well. We also offer custom fertilizing, spraying and harvesting, basically all in the rice realm.

“We are continuously trying to upgrade our equipment,” he adds. 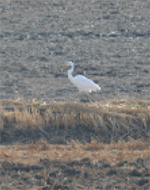 In addition to keeping alive the legacy of successful rice production as fourth generation farmers, Derek and Bart flood their fields in the winter to help with straw decomposition and provide wildlife habitat as well as duck hunting opportunities in one small section for their landowners who like to hunt.

“We also like to limit spraying along the edges of the fields to help the habitat,” Derek says. “These weedy areas give the birds a place to hide and to nest. We believe that you have to leave some vegetation if you want to have these creatures around.

“We also flatten our levees in the winter to provide a nesting place for the shorebirds,” he adds. “For farmers who are interested in providing wildlife habitat, contacting the California Rice Commission is a good place to start. This organization is very active in these types of programs. They try to get the word out to keep people informed about the options for their farms.”