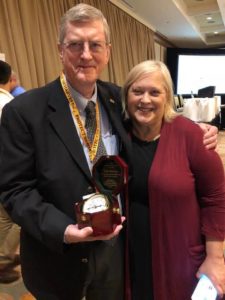 Don Molino received the NAFB Farm
Broadcaster of the Year Award during
the group’s annual convention in
Kansas City. His wife, Laura,
congratulates him.

The award, which was presented at its recent annual convention in Kansas City, recognizes “individuals who have proven their abilities in broadcasting, have shown true commitment to the industry through their actions and their promotional efforts, and have shown leadership in the industry and within their communities,” according to the NAFB website.

It is the highest honor given by the farm broadcasting industry.

“I don’t know what to say except thank you,” Molino told the group of farm broadcasters from across the nation. “You’ve made an old man very happy.”

He is the senior farm broadcaster for The Voice of Louisiana Agriculture Radio Network based in Baton Rouge. His broadcasts are heard each weekday on more than 20 radio stations across the state of Louisiana

Molino has spent his entire career in radio. His first broadcasting experience was in high school on radio station KFTV-AM in Paris, Texas, where he grew up. It was the early 1960s, and he cultivated a love of broadcasting that has lasted a lifetime.

Following his time in the Army, Molino entered the Dallas, Texas, media market where he was the weekend sports anchor for WFAA-TV and news anchor for WFAA and KRLD radio.

That was followed by a move to Mississippi, where he was news director for the Mississippi Agricultural and News Network.

Molino made his final career move to Baton Rouge, Louisiana, in 1980 where he has spent the past 38 years as a news and farm broadcaster for the Louisiana Radio Network and the Voice of Louisiana Agriculture Radio Network.

He also is a regular emcee at the USA Rice Outlook Conference.

Throughout his career, Molino has been an active member of NAFB, having served as national and regional vice-president.

In March 2017, he received the Lifetime Achievement Award from the Louisiana Association of Broadcasters.

He and his wife, Laura, have been married for 12 years. They have three children.