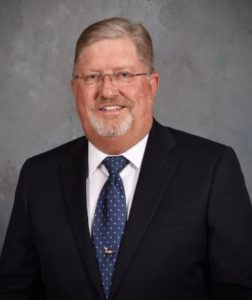 Gerard Frey, who farms near Shortbread,
was named the 82nd International
Rice Festival’s Farmer of the Year.

The 82nd International Rice Festival will recognize Gerard Frey as the 2018 Farmer of the Year during the event, Oct. 18-21, in Crowley, Louisiana.

Frey was born and raised in the rural community of Shortbread, northeast of Iota in Acadia Parish, Louisiana. He is a fourth-generation farmer, and fourth and youngest child of Sylvester and Helen Reiners Frey. Frey has one sister, Anne, and two brothers, Francis and Gilbert.

Married to Dana Clements of Morgan City, they have no children but have an adopted grandson Brayan Jasso.

At an early age, there was never any doubt of Frey’s future occupation. He began driving a tractor at the age of 6 by himself, tilling soil and hauling rice out during harvest. At 9, he began operating a combine and has never stopped.

Now, grandson Brayan is following in his footsteps. At only 9 years old,  he is on his second year driving tractors.

In 1979, during Frey’s senior year of high school, a retired farmer and neighbor offered to rent his farm to him. At 17 years old, Gerard financed 100 percent of the money needed to purchase equipment and crop expenses from a local banker without a co-signer.

This became the first farm that he purchased, still farms and resides on with his family today.

“Looking back 40 years, why in the world they loaned me this money is beyond me,” he says. “But I’m sure they looked at my dad, whom was a great farmer and honorable hard-working man, and that helped.”

From his first crop of about 150 acres of rice and 200 acres of soybeans, the operation has grown to  a peak of more than 4,500 acres of rice, soybeans,and crawfish. Health issues 15 years ago caused Frey to reduce it to the current 3,000 acres, which consist of rice, crawfish,and cattle.

He raises mostly long grain, Clearfield varieties, and about 75 percent is seed rice and no-till planting.

Although rice farming is his passion, Frey was elected mayor pro-tem of Iota at the age of 23, and he became mayor at 27 years old.

Throughout his career, he has received numerous awards, including the highest rice yield and quality challenge in the state in 2003 and 2004, State of Louisiana Farmer of the Year in 2005, Acadia Soil and Water Conservation District Farmer of the Year in 2006, Guy Caire Memorial Award for outstanding leadership in the promotion of soil and water conservation in 2015, and the Good Land Use Award for Environmental and Conservation Excellence in 2015.

After purchasing his first farm, Frey built grain bins to help assist his operation. A crawfish processing plant was then built, which he credits his wife Dana for her managing.

At the plant, they process alligator and their own farm-raised crawfish. In addition, they also process other food products they market from their farm. He also has a commercial and agriculture laser-leveling business along with excavation, dozer, trucking, rental properties and a real estate company.