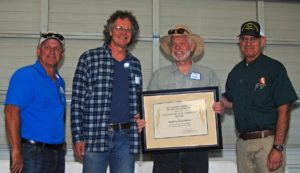 The recognition, presented at the California Rice Field Day, recognizes and honors an individual from any segment of the rice industry who has made outstanding contributions.

“This is an honor to present this to Cass, who really needs no introduction to anyone in this audience,” says Bruce Linquist, University of California Cooperative Extension agronomist, in presenting the award.

Mutters served as a UC Cooperative Extension farm adviser for Butte County from 1994 to 2017, when he retired.

He helped develop the Leaf Color Chart, a simple device growers can use to determine whether a rice field needs a mid-season nitrogen application. About 15 years later, Mutters updated the chart to reflect new varietal releases and their responses to nitrogen.

Not only was the Leaf Color Chart used by California producers, but growers in many other growers also adopted the device.

Mutters also conducted research into the effects of cold water on rice growth and yield. In addition, he helped develop guidelines about when to drain rice fields, allowing growers to save water while maintaining yields.

Mutters was a co-author of the “Rice Quality Handbook,” which Linquist called the “most important rice book in California.”

In receiving the honor, Mutters called it “unexpected” and says he was surprised, having only learned about the presentation a few days before the field day.

Initially, Mutters says he thought about not attending because he was a bit shy and wanted to stay out of the limelight.

“But I decided to come for the primary reason to give me the opportunity to thank you,” Mutters told the audience. “All of this stuff he talked about wouldn’t have been possible without the support of the grower community and all of these organizations you see around the room.”

Since the Board began presenting the award, 56 individuals have been honored.