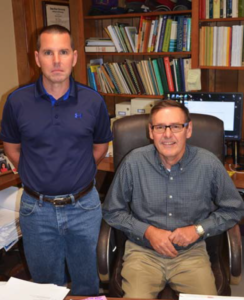 Dr. Don Groth, right, is the new director of the H. Rouse Caffey Rice Research Station while Dr. Dustin Harrell is the new assistant director. Both will continue their research and Extension duties, with Groth working in plant pathology and Harrell maintaining his agronomy projects.

Guidry also named Dr. Dustin Harrell the station’s assistant director, a position previously held by Groth. The announcements were made during the Oct. 31 Louisiana Rice Research Board meeting.

“We’re excited about having both of these outstanding scientists in their new roles,” Guidry told the board.

Groth has worked at the Rice Research Station for 34 years. He replaces Dr. Steve Linscombe, who retired Oct. 1.

Groth earned his bachelor’s degree in botany from Eastern Illinois University, and his master’s and doctorate from Iowa State University, according to a university news release.

He has worked at the Rice Research Station since 2006. Previously, he was high school science teacher and a U.S. Department of Agriculture soil scientist.

Dr. Rogers Leonard, LSU AgCenter associate vice president for plants, soils and water, said Groth and Harrell will continue the tradition of excellence at the station.

Leonard said Groth will have administrative oversight for all fiscal and physical resources at the station. Harrell will be the station’s research coordinator to support all faculty research efforts with projects at the station.

Both scientists will maintain most of their current responsibilities for research and Extension activities, Leonard said.