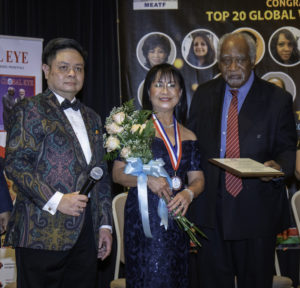 LSU AgCenter rice researcher Ida Wenefrida was honored as one of the Top 20 Global Woman of Excellence for 2020 recently. Presenting her with the award, at left, is Martino Tangkar, chairman of the Multi Ethnic Advisory Task Force, and U.S. Rep. Danny Davis of Chicago.

The honor recognizes women from around the world, including Poland, Canada, the Philippines, Thailand and Africa.

Wenefrida, an Indonesian American, is an associate professor who conducts her work at the LSU AgCenter H. Rouse Caffey Rice Research Station near Crowley, Louisiana. She has developed a high-protein rice variety, Fontiere, and is involved in research to develop more new varieties.

She received her bachelor’s degree in agronomy in Indonesia, her master’s degree in plant pathology from Mississippi State University and her doctorate in plant health from LSU.

Don Groth, resident coordinator of the Rice Research Station, said Wenefrida’s award is well deserved and that she is a valuable asset to the rice industry.

“We are very proud of Ida’s accomplishments in rice research,” he said. “The benefit from her research helps rice producers in Louisiana, the U.S. and around the world.”