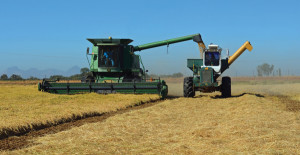 The California Air Resources Board recently approved a plan to greatly increase the amount of incentive funds available in the Sacramento Valley to help farmers replace older tractors and other farm equipment.

Under the proposed FARMER – or Funding Agricultural Replacement Measures for Emission Reductions – program, the board plans to offer $136 million in incentives to help farmers buy new off-road farm equipment with cleaner-burning diesel engines. Most of that would go producers within the San Joaquin Valley Air Pollution Control District because of the large amount of agricultural machinery.

The board is under a tight timeframe and must have all the funds – which were included in the state’s 2017-18 budget – encumbered by June 30, 2019, and fully spent by June 30, 2021. Of that, $107 million is proposed for the San Joaquin Valley, said Erin Uchida, CARB program lead. Gov. Jerry Brown also has included an additional $100 million for the FARMER program in his proposed 2018-19 budget, which under state law must be approved by June 30, 2018.

Under the FARMER program, the board would underwrite up to 80 percent of the cost of new farm equipment powered by cleaner-burning diesel engines.

New to this program are proposed incentives to cover up to 75 percent of the cost of zero-emission utility terrain vehicles.

In addition, the board plans to continue the pilot trade-up program, where owners of older Tier 0 and Tier 1 engines would agree to scrap them and trade up at little out-of-pocket cost to newer reconditioned Tier 2 or Tier 3 engines. The used equipment would come from owners who received financial incentive to purchase new Tier 4 or Tier 4i engines.

Participating equipment dealers would handle most of the required paperwork accompanying transactions.

The amount of funding allocated to each participating district takes into account the number of what the state refers to as “off-road, diesel-fueled mobile agricultural equipment” – in use locally, Uchida said. Statewide, the ARB estimates there are 160,000 pieces, not counting stationary equipment such as pump engines and on-road vehicles such as heavy duty trucks.

The formula also considers the amount of nitrogen oxide and PM 2.5 emissions generated by the equipment. PM 2.5 are particulates 2.5 microns or smaller in diameter. The average human hair, by comparison, is 70 microns in diameter.

Providing cost-share to farmers who purchase pumps, tractors, harvesters and other equipment with newer cleaner-burning engines that meet EPA air pollution guidelines is nothing new for CARB. The agency has been doing so since 1998 when it implemented the Carl Moyer Program. That highly successful effort provides financial grants for cleaner-than-required engines and equipment.

Since this action has just recently been taken by CARB, the regional air districts in the Sacramento Valley will need time to get organized to solicit and process applications.

At this point, the California Rice Commission recommends producers reach out to their local air district to ensure they’ll be contacted with later-developing information. CRC also will also try to keep growers informed with future updates as the districts move to administer the new program.

The amounts of funding slated to be available in the Sacramento Valley rice counties later this year are: