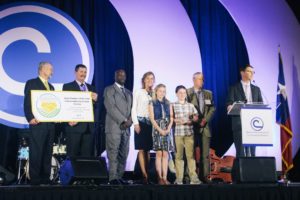 Bruce and Rick Rominger, partners in Rominger Farms of Winters, California, were honored recently by the National Association of Conservation Districts for their conservation practices as producers.

The brothers, who have a diverse operation that includes rice, received the Hugh Hammond Bennett Award for Conservation Excellence Farmer award at the association’s recent annual meeting in San Antonio, Texas.

Named after Hugh Hammond Bennett, considered the “father of soil conservation,” the award is designed to “recognize those who are dedicated to conservation planning and implementation,” according to a news release.

The Romingers were spotlighted for their innovative conservation efforts — particularly improving soil health and water-use efficiency — on their 6,500 acres of land in Yolo County.

“Managing that many acres in an environmentally sustainable way while maintaining productivity takes a commitment to long-term conservation planning, which makes Bruce and Rick worthy recipients of this prestigious award,” according to the release.