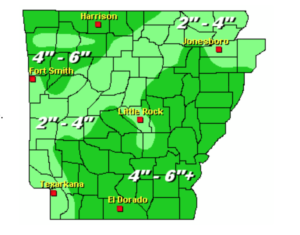 Rainfall received during January, courtesy the National Weather Service. This does not count the previous months.

Continuously wet conditions further delayed field preparation throughout much of Arkansas this week, as intermittent rains continue to saturate soils in the state.

At production meetings organized by the University of Arkansas in January and February, both growers and agronomists noted the delay in field preparation for the 2019 planting season.

Jarrod Hardke, rice agronomist for the Division of Agriculture, said Feb. 22 that it appears increasingly unlikely that any growers in the state will be able to plant rice on March 15, typically the start of the early planting season.

“Assuming it ever stops raining, you’re looking at seven to 10 days of dry weather before you can get a tractor out in a field,” Hardke said. “Seventy percent of rice acres in this state are rotated with soybeans, and the vast majority of those soybean fields haven’t been worked in any manner.”

On Feb. 22, the National Weather service issued flash flood watches and warnings for more than 30 counties in the southeastern third of the state, from Chicot to Pulaski counties, and as far north as Mississippi County.

Many growers will need to till their fields to a significantly greater degree than in typical years, Hardke said, due to widespread rutting caused by the 2018 harvest.

“We’re not talking about standard tillage,” he said. “This will require excessive tillage.”

According data from the National Weather Service’s Little Rock station, every county in the southeastern half of Arkansas received 30-50 inches of rain between Aug. 22, 2018, and Feb. 22, 2019. The measured rainfall ranged from 110 to 200 percent of typical rainfall within the same six-month period.

In addition,  many fields in the state likely still require fertilization.

Soil testing, which growers use to determine the nutrient needs of a field, typically precedes fertilization. Linda Moore, a technician with the University of Arkansas Soil Testing Laboratory in Marianna, said the laboratory had received about 13,800 soil samples from agricultural plots around the state from Jan. 22-Feb. 22. That compares to a norm closer to 18,500 samples during the same period.

Robert Goodson, Phillips County Extension agent, said growers most fields in his county are saturated, although water was draining well as of Friday morning but “that has the possibility of changing.” 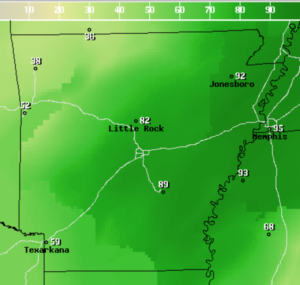 The National Weather Service forecasts rain probability during the 12-hour period ending 7 a.m. CST, Feb. 23. The darker the green, the greater the chance. Jonesboro, for example, has a 92 percent chance of receiving measurable precipitation during that period.

Other rivers in the state are also at or near flood stage. Data from the National Weather Service show the Black River, measured at Corning in Clay County, at about 12 feet as of 3 p.m., Feb. 22. Flood stage at that location is 15 feet.

In Patterson, the Cache River, which floods at 9 feet, was also recorded at 12 feet. In White County, the White River was measured at Georgetown at 24.6 feet, more than 4 feet above flood stage.

“This is really affecting corn producers,” he said, adding that most corn in the county will probably need to be late-planted, if at all.