RiceTec shows off FullPage, other hybrids in the pipeline 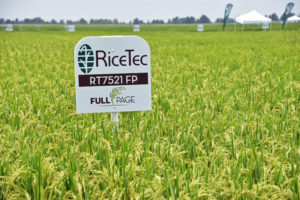 RT7521 FP is one of two FullPage hybrids that will be commercially available from RiceTec for the 2020 season.

With Canada‘s recent approval, RiceTec is set to launch its FullPage herbicide-tolerant rice system for the 2020 season.

The Alvin, Texas, hybrid rice developer showed off two new FullPage hybrids as well as a new medium-grain conventional hybrid and other experimental products at its recent Arkansas field day in Harrisburg.

For 2020, RiceTec will have the FullPage long grains, RT7321 FP and RT7521 FP, available in commercial quantities.

With the commercialization of the FullPage system, RiceTec will begin phasing out its Clearfield hybrid offerings, such as Clearfield XL745, Gemini 214 CL and RT 7311 Clearfield.

FullPage hybrids are paired with the imazethapyr and imazamox herbicides, Preface and Postscript,  respectively, from Adama. They control of a number of grasses and broadleaves as well as weedy rice.

Because each of the hybrid parents contains the herbicide trait, the hybrid offspring have increased imazethapyr tolerance.

As with any rice cultivar, he recommends starting with a residual preplant herbicide. One of his favorites is a premix of Sharpen and clomazone.

Although the label states a use rate of 4-6 ounces, Kendig said he prefers the 6-ounce rate to optimize weed control. 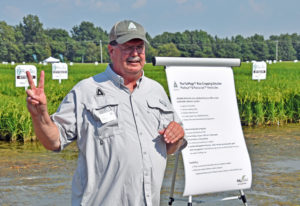 herbicide development lead with Adama, emphasizes that two applications of Preface herbicide should be made during the season.

As with other traited technologies, the FullPage system will carry a stewardship agreement.

Among the key components are:

6. Preface and Postscript are the only IMI herbicides that may be used on FullPage rice

“Look at what’s happening in other crops with Palmer pigweed, barnyardgrass in rice and glyphosate-resistant barnyardgrass in Tennessee,” Kendig said. “This stuff is really scary, so stewardship is critical. And there’s no better rotational crop than soybeans.”

Products in the pipeline

Outside of the FullPage system, RiceTec showcased a number of other hybrids.

• EXP7774 – a long-grain hybrid with milling and stability similar to XP760. But it matures about two days earlier and is slightly shorter than XP760.

• EXP7775 – a long-grain hybrid similar to XP753 but with slightly higher yields. The experimental also has good straw strength.

• EXP7776 – is similar to Clearfield XL745 but without the herbicide trait. The experimental matures about three days later than XL745 and has better straw strength.