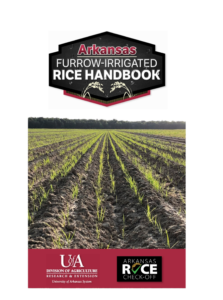 Furrow-irrigated rice has been gaining ground, increasing from less than 1% to 10% of total rice acreage in Arkansas in the past five years.

The publication is available on the Cooperative Extension Service website at https://bit.ly/ArkRiceHandbook.

In 2019, 1.1 million acres of rice were harvested in Arkansas, accounting for 46% of total U.S. rice production. Most of that acreage relied on flood irrigation.

Furrow-irrigated rice, also known as row rice or upland rice, has been grown in small pockets of Arkansas for more than 30 years. This method eliminates the need for constant flooding. Instead, small channels – or furrows – are dug between the rows and carry water to the crop.

Five years ago, this method was used on less than 1% of rice acreage in Arkansas. Now, it accounts for 10% of rice acreage, according to Jarrod Hardke, rice Extension agronomist with the University of Arkansas System Division of Agriculture

Similar increases in adoption are occurring in the Missouri Bootheel and northeast Louisiana, Hardke said.

The primary reasons for furrow irrigation are to simplify crop rotations and decrease time and expenses associated with flood-irrigated rice. Additional benefits could include water savings, which will prove more beneficial as water resources are further depleted.

Since rice is a semiaquatic plant, non-flooded rice production research efforts have been limited. Hardke and other researchers began compiling information in 2017 to provide producers with some limited guidance.

“This year we realized there was a need to expand on that previous information and provide something more robust as acres have continued to increase and research efforts have expanded to answer additional questions,” he said. “As research and adoption continue and we learn more, the handbook will be updated regularly to provide the best possible information to growers.”