“They said a tornado was headed for Bono which is where I live,” he said on Friday.

“My daughter got the dog and headed for the bathtub,” Baldridge said, adding that he was “listening for that train noise to come out of the black sky.”

Assessing past damage, worried about the next storm

As daylight came Friday, farmers and Extension agents and agronomists were making the rounds, trying to get a preliminary damage assessment. Laura’s arrival came just as corn and rice harvest began. At this time of year, soybeans are standing tall in some fields and cotton bolls are forming.

As these assessments continued through the day, agents and agronomists say they’re worried about another storm system expected to hit on Saturday. 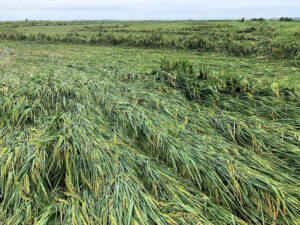 Flattened, or lodged, rice between Crockett’s Bluff and Arkansas Highway 1 in Arkansas County. Taken Aug. 28, 2020, the day after Tropical Storm Laura came through the state — U of A System Division of Agriculture image by Phil Horton.)

Photos taken by Extension personnel show swaths of flattened, or “lodged” plants in the heart of rice country. Jarrod Hardke, extension rice agronomist, said Friday that in an early round of assessments, it seems “rice damage is luckily minimal.”

“The damage appears worse in the south and lessens as you move north,” he said. However, “the closer to harvest the field is, the worse the impact, but cultivar, seeding rate and fertility are all impacting factors.”

With Saturday’s storms looming, Hardke said “lodging will worsen with time and rain.”

Matthew Davis, Extension staff chair in Jackson County, said soybeans in his county seemed to have been the hardest hit.

“Soybeans have a lean to them,” he said. “Some that were 4 feet tall are around 2 feet tall now.”

“These fields should stand back up, but not completely,” he said. “They will have a lean the rest of the year. There shouldn’t be any yield impact, but they will be impossible to scout.”

In White County, Extension Agent Jan Yingling said she found roads covered with water and patches of fields leaning, but “my farmers have told me that most everything is still standing and they feel like they were spared.”

In Ashley County, along the Arkansas-Louisiana border, extension county chair Kevin Norton said that about 90 percent of the county’s cotton and soybean acreage had “some degree of lodging.”

“Cotton seems to be the hardest hit,” Norton said. “Corn is all over the board. I would estimate that 60 percent of corn acreage has some degree of lodging, ranging from 5 to 95%.”

Cross County Extension Staff Chair Rick Wimberley, said rice and corn in his county was still standing for the most part, but soybeans were hit hard. 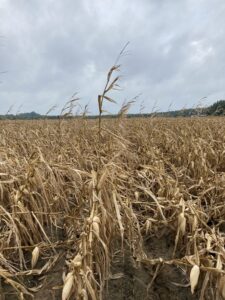 Corn damage in Ashley County, Arkansas. Ashley County extension staff chair Kevin Norton estimated that about 60 percent of corn acreage in the county had some degree of damage from Tropical Storm Laura, ranging from 5 to 95 percent, depending on the area — Image courtesy Kevin Norton

“I saw a lot of fields laying down. Don’t know if they can stand back up or not,” he said.

Wimberley, who is also a volunteer firefighter and a storm spotter, said “there was either a small tornado or straight line winds that broke tree limbs, uprooted trees, and blew down the city pavilion at Hickory Ridge.

“An airplane hangar was heavily damaged there, along with one aircraft that was undergoing maintenance,” he said. “The communications tower at the Hickory Ridge Fire Department was blown down along with a power pole. Many of the fields along a line from Hickory Ridge to approximately one mile east of Penrose are starting to flood. I expect floodwater to increase in the lower section of the county in this area the next couple of days because of poor drainage along a tributary know as Second Creek that flows into northern St. Francis County. This area has a history of flooding with heavy rains.”

In Randolph County, Extension staff chair Mike Andrews said Laura destroyed a farm shop near Biggers, flattened half a field of soybeans and even flipped a few peanut vines out of the soil. Even so, Andrews said “I think we made it through way better than I thought the crops would.”

Which way the wind blows

Bill Robertson, Extension cotton agronomist, said that “wind did push cotton over, especially the taller cotton, but I hope a lot of it will stand back up.” He also noted some plants simply becoming entangled with one another.

The circular nature of Laura’s winds across the state left clues in the patterns of field damage; which was dependent upon how the rows were oriented.

“The big issue is forecast rain with upcoming weather fronts,” he said. “We need things to dry. If stays wet, it will rot a lot of crop.”

Forestry was also affected by Laura. Calhoun County Extension Staff Chair Jaret Rushing was still trying to work even after the storm killed his power and damaged his home.

“I was actually contacted by a forester this morning that needed a rain report because they were moving a logging crew on a tract of land down here on Moro Creek Bottoms,” Rushing said, amid the sound of generators running. “With the 5-plus inches of rain we received, that particular tract will probably be put off on harvesting until 2021.

“Historically, when we get the first flooding rain here in late August or early September it will signify the beginning of the wet season,” he said.

A Category 4 at landfall, powerful Laura approached Arkansas as a Category 1 hurricane, before weakening to a tropical storm just before crossing the border.

“It’s kind of crazy, Laura was barreling up here like a freight train and holding together as the storm passed through Louisiana,” said Dan Koch, meteorologist for the National Weather Service in North Little Rock. As it got closer to Arkansas, “it kind of sheared apart. The top layer sheared to the east and the lower part came toward Arkansas. We did have some westerly winds aloft and that was enough to shear it apart and separate top from bottom.”

Koch said the shear was something that would merit further investigation.

Koch said Laura was the first time the Little Rock office had issued a tropical storm warning for Arkansas.

“We had so many questions about this yesterday from all walks of life,” he said. He explained that “it’s not that we never had tropical storm force winds, but it was a National Weather Service policy that we never issue tropical storm warnings this far inland. This was the first time we had the chance to issue one of those.”

Mary Hightower is chief communications officer for the University of Arkansas Division of Agriculture. She may be reached at mhightower@uaex.edu.