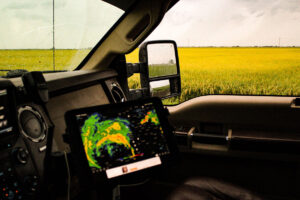 Since September 2005, Hurricane Rita has been southwest Louisiana’s reference for measuring the severity of weather events.  Yesterday, thanks to Hurricane Laura, this area received a new reference point and a wound from which it will take some time to recover.

The city of Lake Charles felt the brunt of the storm, although the port and the rail facility there appear to have been spared. But Farmers Rice Milling Co. reported some roof damage.

In addition to the devastation directly beneath the eye of Laura in Cameron and Calcasieu parishes, farmers in Vermillion, Jeff Davis, Allen, Beauregard, Evangeline, and Avoyelles parishes were dealing with flooding and power outages in the aftermath of the storm’s Category 4 hurricane-force winds and rain.

While a majority of southwest Louisiana’s rice crop was out of the field prior to Wednesday, some rice remained to be harvested.  Growers were focusing on recovering from damages to their operations, standing water, and full capacity in the bins and drying facilities.  The most critical need at this point was restoring electrical power to maintain the quality of rice in their bins.

Late Thursday, Aug. 27,, Sammy Noel, a rice grower south of Abbeville in Vermilion Parish, said,  “We have a generator to help at the house, and we’re working to clean up and get things back in order around the farm, but we don’t have the ability to power up the bins.”  This morning, there were reports that power in that area had been restored so some bins already are up and running.

Near Thornwell in southern Jeff Davis Parish, rice farmer Paul Johnson said damages to the roof of some bins had them “scrambling to get tarps and make temporary repairs to protect the rice before any rain fell.”

In the western part of Calcasieu Parish near Laura’s landfall, Ronald Habetz said they lost several shop structures and one of their 36-foot bins.

In central Louisiana, Phillip Lamartiniere, who farms in Avoyelles Parish, echoed the plea for power.

“Guys were cutting up until the rain started, and they need power to get air moving on that rice.  It was higher in moisture than we typically harvest and it needs air to dry out. 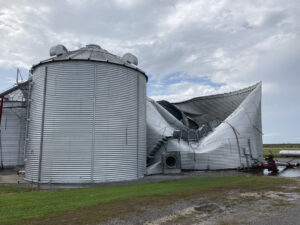 “While we had minimal structural damage, the rice that’s in the field is flat.  The flag leaves on our younger rice are damaged, which will decrease quality and yield potential.”

“The storm damage is considerable, especially in southwest Louisiana,” said Bobby Hanks, CEO of Supreme Rice Mill in Crowley and chair of USA Rice.  “Even with time to prepare, you can never lock down everything.  Our main concern at the moment, I think, is to get power restored to farms and dryers so we can maintain the quality of what was harvested.”

Meryl Kennedy-Farr, CEO at Kennedy Rice Mill in Mer Rouge, said, “We’re OK here but the winds were tough!  Most of our team is without power and internet but, thankfully, the plants are still running.”

The storm had a minimal impact on the Texas rice crop.  LG Raun, who farms near El Campo in Wharton County, reported that less than 5% of the rice in his area had not been harvested and they received no rain or wind from Laura.  Raun also said that a high percentage of rice there was being ratooned and most of it looked very good.

Dr. Mo Way, research entomologist at the Texas A&M AgriLife Beaumont Research Center, said that most of the main crop was harvested prior to the storm.

“Our area received some gusty winds, but I don’t expect it to have an effect on the ratoon crop,” he said.

As in Louisiana, there are major power outages in the region that could impact the ability to dry recently harvested rice.  It is also likely that any unharvested rice in the eastern rice zone was lodged by the winds associated with the hurricane.

As Hurricane Laura traveled across Arkansas rice country yesterday, it brought an average of 3 inches of rain and winds that reached speeds of 55 mph.

By yesterday afternoon, southeast Arkansas had received less than an inch of rain.  Twenty-four hours later, Joe Mencer in Lake Village reported, “The wind was our real worry.  My weather station in the field recorded gusts up to 44 miles per hour.  Happy to say the crop held up.  We were harvesting rice the last three days ahead of the storm at higher moisture levels than we like in anticipation of high winds.  The yields are good on what’s been harvested so far.”

In McGehee Aug. 28, rice farmer Jim Whitaker said, “Twenty-five percent of our rice is down.  Our power is out and the wind was strong enough that it blew a lot of limbs down and there is debris everywhere.  It also caused some damage to our bins and personal property.”

High winds also caused downed rice around Stuttgart and Pine Bluff.  Some south Arkansas producers were able to get in the field last week and start harvesting.  However, with more rain expected through early next week, it’s still uncertain when fields will be dry enough to get back in.

By the time the storm reached northeast Arkansas, Laura had added tornadoes to her repertoire.

“On our farm in Newport, we had tornadoes pop up around us and one tornado took out a field of corn and mangled one of our center pivots,” said Jennifer James.  “The storm actually caused more damage to our corn and beans than to our rice.”

Mike Sullivan, who farms in Burdette, reported little downed rice on his operation and only an inch and a half of rain.  “Fortunately, the wind here wasn’t as bad as predicted.  The heavy rain and wind was between our farm and Jonesboro and down towards Little Rock.”

In Mississippi, Marvin Cochran in Washington County reported heavy wind and some rain but no significant damage.  Kirk Satterfield in Bolivar County said they saw rain and strong winds, but that late planting and draining just beginning had much of their rice green, which helped it withstand the storm.  Dr. Bobby Golden at Mississippi State University near Stoneville said he heard reports of lodging around field edges, but no horror stories.

“We were fortunate,” said Rance Daniels, from Hornersville.  “People I talked to had less than an inch or so of rain with no wind damage to speak of.  Everyone here is pleased to have dodged the bullet of Laura.”

The article first appeared in USA Rice’s “The Daily.” Steve Linscombe and Emily Woodall contributed to this report.