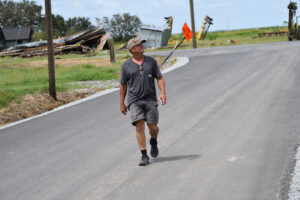 Farmer Paul Johnson gazes up at the roof of a building that was damaged by Hurricane Laura, exposing part of his rice crop to the elements — photos by Bruce Schultz/LSU AgCenter

Rice farmers without electricity across southwest Louisiana are struggling to save their rice crop in storage.

He stored his grain at a dryer facility in Thornwell, but the storm blew parts of the roof away, exposing his rice to rain. Without electricity, he was not able to dry the grain.

“This old dryer has withstood a lot of storms but not this one,” Johnson said.

Like many farmers, he had one of his best crops in several years.

But Supreme Rice Mill of Crowley was prepared for this catastrophe, renting generators for farmers in anticipation of the disaster and providing workers to help farmers make repairs on their bins and get the generators connected to their electrical system.

“You’re talking a class operation there,” Johnson said. “I don’t know what I’d do without Supreme. The first call I made was to them, and they handled it from there.”

Johnson said Supreme has sent trucks to get his rice, and company representative John Morgan was onsite helping set up the generator.

LSU AgCenter rice specialist Dustin Harrell said Johnson is not alone in the hard-hit area around Lake Charles in the struggle to save the harvested rice.

“They’re all trying to get that rice dried and moved,” he said.

“The farmers finally had a good crop, and now they’re faced with this,” he said. 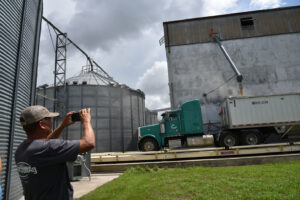 Bell City farmer Paul Johnson photographs a load of his rice leaving a dryer at Thornwell. Hurricane Laura blew some of the building’s roof off, exposing his rice, and Johnson is using moving his grain inside the structure to prevent it from spoiling.

Farmer Jordan Aguillard of Grand Lake finished harvesting his rice crop the day before storm hit. But his challenges were not over.

Not only was his house damaged by Hurricane Laura, the tops of three bins full of rice were blown off by the storm. And the grain needed to be dried to prevent it from spoiling.

Aguillard had stored some of his rice in bins owned by Rick Hoffpauir, and the tops of three bins were blown off, exposing the rice to the weather. As Aguillard was waiting on an insurance adjuster and electrician to blow air into the rice, storm clouds threatened overhead. Aguillard said one option may be to move the rice to other storage facilities.

Hoffpauir said Aguillard eventually got his generator connected, and he was able to move the exposed rice to the bins that were intact.

“It’s still standing. The shingles are all gone, and I think the ceiling is going to fall in,” he said. Many other houses in the Grand Lake area where he lives are in similar condition.

Aguillard also has cattle, but he said they survived the storm, although fencing will need to be replaced. “I’ve got a lot of fence down, and it’s mostly from debris from houses,” he said.

Hoffpauir said it appears the wind damage is much worse than from Hurricane Rita in 2005. Hoffpauir said his house is badly damaged as well as his son’s next door, along with a shed full of farm equipment. “I haven’t even seen my lawnmower yet,” he said. 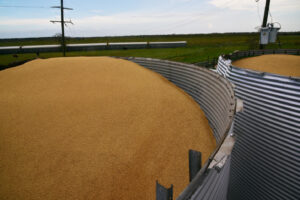 Rice is exposed in one of three bins holding the rice crop of farmer Jordan Aguillard of Calcasieu Parish. In the distance is a train of rail cars knocked over by Hurricane Laura.

Proof of the wind’s power is obvious just a quarter mile away from Hoffpauir’s place. A train of dozens of empty rail cars is laying on its side.

Neighboring farmer Johnny Hensgens had a bin destroyed. Talking from Ft. Worth, Texas, where he had evacuated, Hensgens said his house was also badly damaged.

“The roof split open. My son’s house’s roof is off, and it’s getting wet when it’s raining,” he said.

David Bertrand of Elton, who buys and sells rice, was picking up a generator in Lake Charles to supply power for his rice bins. He said many farmers are dealing with the same problems of drying their rice.

“It’s a fight. It’s disastrous,” Bertrand said. “Several farms’ bins are missing roofs, or they have collapsed roofs. I don’t see how some of these guys are going to survive.”

To the east, the impact on rice farmers was minimal. Farmer Jeffrey Sylvester of Whiteville in St. Landry Parish had about half of his rice harvested, and he borrowed a generator from another farm to run his dryer system.

The rice remaining in the field went through the storm in good shape with some downed areas, but Sylvester was relieved that much of the crop survived intact, along with his soybeans. 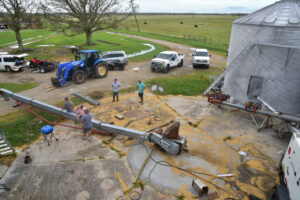 Farmers work to get a generator connected at the bins holding part of Jordan Aguillard’s rice crop near Lake Charles, Louisiana.

Adam Habetz, who farms west of Lake Charles, has one generator that he has to rotate between two sets of bins. He’s also trying to fix his leaking roof and tend to cattle. “It’s all got to be done. You just have to pick your battles,” he said.

Habetz said he finished harvesting his rice crop Sunday night, but its moisture level was high, at 22% to 23%, and it required drying.

His electric provider told him it will be at least six weeks before power is restored. In the meantime, Habetz is paying $200 a day for generator rental in addition to the fuel cost. “That’s better than losing your whole crop,” he said.

All but six of his cattle have been located, but fencing is inadequate now. “The fences are a mess. There’s no patching it. It’s got to be replaced,” he said.

Todd Fontenot, AgCenter agent for rice in Evangeline and Allen parishes, said power was restored in Evangeline Parish, but Allen Parish farmers remain without power unless they have generators.

A thunderstorm came through Evangeline Parish during the weekend and flattened some rice that had withstood Laura.