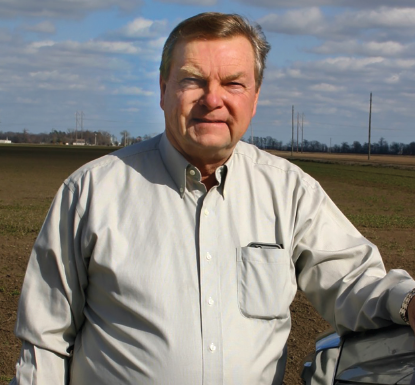 I grew up in the small Mississippi Delta town of Tunica — 35 miles south of Memphis, Tenn., and 6 miles east of the Mississippi River. My father and four of his brothers farmed mostly cotton, soybeans and wheat in Tunica County. I got into cotton pest management at the early age of 18 with my brother, Aubrey, who later left the business to me. I expanded my client base and began to consult on rice, soybeans and wheat in addition to cotton. Today, my stepson, Judd Sartin, and I work for 25 growers in five counties in the north Mississippi Delta. 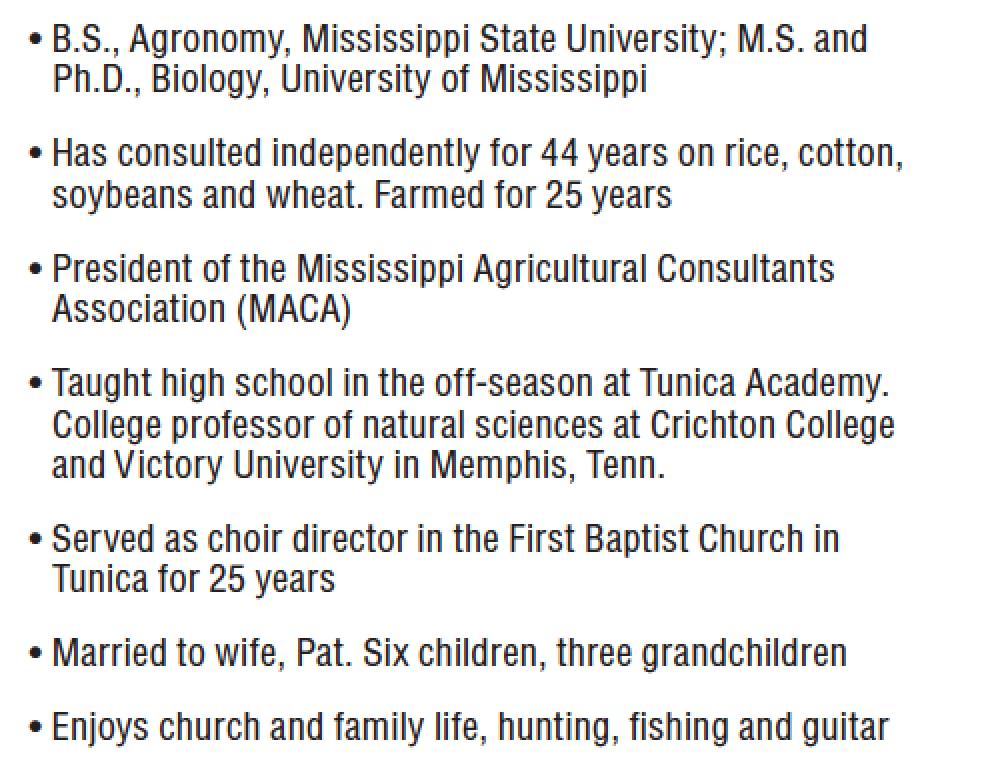 In 2015, wet spring weather caused hardships in levee
construction, weed control and timely fertilization. We had to apply some pre-flood nitrogen early, which compounded weed control problems. It was almost mid season before the flood was established in certain fields. Despite these challenges, farmers in our area harvested a good crop.

Weed pressure in most fields includes barnyardgrass, broadleaf signalgrass and sprangletop. Broadleaves are less of a problem, but we do have to contend with pigweed, morningglory, coffeebean and indigo. Resistant annual flatsedge is becoming more prevalent, and we also have yellow nutsedge in a few areas.

We grow about 95 percent h 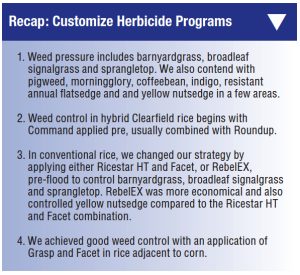 ybrid rice — half Clearfield and the other half non-Clearfield. The primary Clearfield hybrid varieties are Clearfield XL729 and Clearfield XL745, and the non-Clearfield hybrid is mostly XL753, with some XL723 being planted, too. Weed control in hybrid Clearfield rice begins with Command applied pre, usually combined with Roundup. At one- to two-leaf rice, most of the crop receives an application of Prowl and Newpath, followed by another application of Newpath pre-flood. The pre-flood dose typically contains a herbicide, such as Facet, Permit or Strada Pro, for broadleaves. If we need to apply Facet, we use Clearpath — a premix of Newpath and Facet. Command and Prowl provide a two-shot approach to keep grass from emerging.

In conventional rice, weed control is more of a challenge. Barnyardgrass is our No. 1 enemy, and sprangletop runs a close second. In the past, Propanil and Facet, or Regiment and Facet, have controlled barnyardgrass and broadleaf signalgrass, but they allow sprangletop to flourish. We recently changed our strategy by applying either Ricestar HT and Facet, or RebelEX, pre-flood. Both programs control troublesome grasses and need water to be activated. RebelEX was more economical and also controlled yellow nutsedge compared to the Ricestar HT and Facet combination. When treating rice adjacent to corn, we achieved good weed control with an application of Grasp and Facet.

In 2016, farmers indicate that they will plant more rice as the price of soybeans fades. It’s difficult to cover high fixed costs and high land costs by growing soybeans, which gross about half of what a rice crop provides.