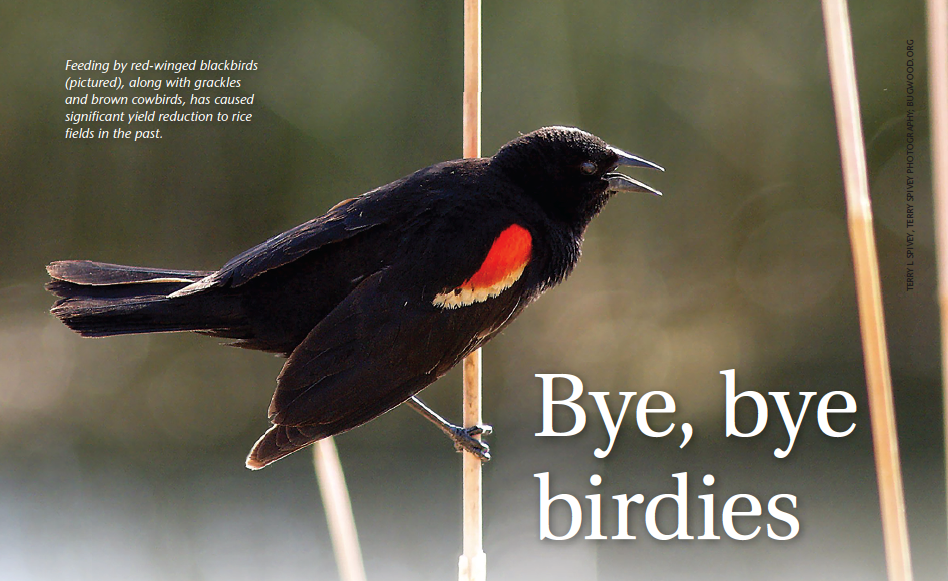 The EPA recently registered a non-lethal bird-repellent seed treatment for rice. The news traveled swiftly among producers, who have seen firsthand the damage birds can cause to newly seeded rice fields.

The Environmental Protection Agency has granted a conditional registration to the non-lethal bird repellent, AV-1011, from Arkion Life Sciences of New Castle, Del. Each state has to register the product, but those approvals typically come shortly after the EPA’s.

The announcement is good news for Lake Arthur, La., rice producer Kevin Berken, who has battled birds and used the product under an emergency use exemption for several seasons.

“We’ve been after this for several years,” Berken says. “For them to give us conditional approval for two years, it’s huge for us to be able to use it. For us down here in Southwest Louisiana, very few of us can get away without using it at planting.

“If you drill, (the birds) will walk along the rows and pull the seeds out of the rows. If you water plant, it’s absolutely terrible.”
Dustin Harrell, Louisiana State University AgCenter Extension rice specialist, agrees.

“Birds are a tremendous problem, especially here in Southwest Louisiana,” he says. “They can pretty much take out a field in a matter of hours, especially if it’s surface broadcast or shallow incorporated.” 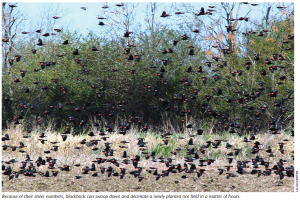 Altogether, birds caused more than $23 million in losses in 2011 — the last year for which figures are available — to newly planted rice fields in the six rice-producing states, according to the National Wildlife Research Center in Fort Collins, Colo. The offensive flocks are comprised mostly of red-winged blackbirds, grackles and brown-headed cowbirds.

In addition to eating recently planted seeds, the birds pull newly germinated seedlings from the ground to eat, reducing stands.

Berken says he saw firsthand how much damage the birds can cause when he planted two fields totaling 60 to 70 acres without treated seed in 2014. Those fields yielded about 50 percent less than treated fields because of the large areas devoid of plants.

In 2015, Berken waited two to three weeks past his normal planting time while the EPA considered a Section 18 request — he wasn’t going to plant without treated seed.

Once the EPA granted the emergency use exemption in late March, Berken says he planted 1,200 acres in six days with treated seed. 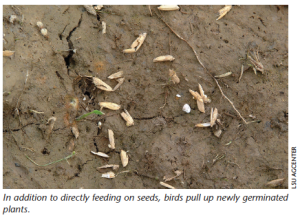 When birds eat the treated seed, it causes them immediate but harmless digestive distress, deterring them from consuming more seed. But it’s harmless to other water dwellers, including crawfish.

AV-1011 had been used under a Section 18 emergency use exemption in Louisiana, Texas and Missouri since 2009 and more recently in Mississippi and Arkansas. With the Section 18 came acreage restrictions, which the Section 3 does not carry.

In addition, each state had to reapply annually for a Section 18 and wait for approval. In 2015, for example, the EPA didn’t grant a Section 18 until mid-March, which was when Louisiana growers were ready to plant, Harrell says.

“It’s used on a lot of acres because we plant so early when the blackbirds are still here,” he says. “For the guys down here, it’s big news because they fight for it every year.”

Now growers can order treated seed and not have to wait for the EPA.

Known technically as a Section 3(c)(7) registration, a conditional registration gives the registrant more time to submit outstanding data requirements. In this case, Arkion has until Jan. 5, 2018.

Ballinger says meeting the EPA’s timeframe won’t be a problem for the company.

Although the information is missing, use of the pesticide won’t increase the risk of unreasonable adverse effects on humans or the environment, according to EPA information.

News of the registration spread fast. Within 24-hours of the EPA’s announcement, Ballinger says the company received orders for product to treat about 40,000 acres worth of rice seed.

The treatments allow growers to plant up to three weeks earlier when birds are still present, he says. Growers also can reduce seeding rates and not have to worry about overplanting to compensate for bird damage.

“It gives them protection for weeks after planting and after they flood,” Ballinger says, adding it also is effective against other rice seed-feeding birds such as ducks. The product has undergone years of study beginning in 1996, he says.

John Cummings, a retired wildlife biologist with the National Wildlife Research Center, led researchers in trials at the University of Missouri’s Delta Center in Portageville with red-winged blackbirds in 10 experimental field enclosures. The bird population was equivalent to about 4,440 blackbirds per acre per day.

Their results were published in a 2011 issue of the Journal of Wildlife Management.