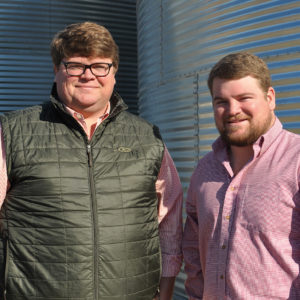 After hearing good things about Loyant herbicide, Hunter Carter — who farms with his brother, Drew — was able to see firsthand how it performed on their own operation last season. The Carters were part of a handful of producers who participated in the Field Forward Program and experienced Loyant herbicide before it was registered. And the Carters liked what they saw.

“It worked wonderfully. It did everything we’d heard it could do,” Hunter says. “It provided complete control of all the grasses and the sedges that were present in the field.”

A Typical Weed Program
Most of their ground is zero-graded, and the Carters use either no-till or minimum till to avoid disturbing the seedbed.

“Our goal is to decrease tillage in order to control weed pressure,” Hunter says.

A typical herbicide program involves spraying Command and Sharpen — and glyphosate if needed — shortly after planting. About two weeks later, they return with an application of RiceBeaux and pendimethalin, depending on the weather. The third application comes after another couple of weeks and involves a Regiment-Facet tankmix preflood. A permenent flood is applied and held until the fields are ready to drain for harvest.

Low Use Rates
Their 5-acre Loyant test field received a burndown using glyphosate and Command followed by an application of RiceBeaux. At the four- to five-leaf stage, they followed with a tankmix of pendimethalin for residual activity and Loyant. The pendimethalin recommendation came from his brother, Grant, who walks all of the brothers’ fields and manages the Helena dealership in Stuttgart.

The results were “excellent” weed control, including resistant barnyardgrass and flatsedge, Hunter says. What appeals to him is Loyant’s broad-spectrum activity.

“I spray everything myself,” he says. “Just from the mixing side, it’s easier. With Loyant, it’s one chemical instead of putting two to three together to kill one thing. So that’s one of the big things for me is just the ease of mixing and not having to have nearly as much product.”