Be a good neighbor

Pay attention to avoid drift when applying soybean desiccants around rice fields, even those that are near draining and appear finished.

Generally, this time of year we discuss midseason to harvest management options for our rice crop. But today I would like to write on a project one of our graduate students, Justin McCoy, is currently working on at the Delta Research and Extension Center.

His project is investigating the influence of late-season off-target movement of soybean desiccants to rice fields and their influence on rice performance.

Preliminary research was established in 2016 to investigate late-season off-target herbicide movement to rice. Two trials were conducted investigating 1) multiple varieties’ response to a single application of either glyphosate (3.2 oz/ac) or paraquat (1.6 oz/ac) applied near 50 percent heading and 2) a single variety’s response to multiple herbicides applied at different timings after 50 percent heading.

For trial 1 evaluating multiple varieties, visual injury associated with the application of paraquat ranged from 5 to 25 percent, depending on cultivar and rating date. The greatest injury symptoms were observed on Rex and Jupiter and the lowest injury ratings were observed on CLXL745 and XL753. 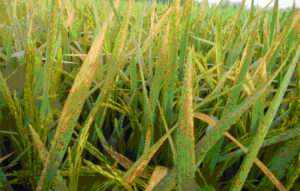 When paraquat was applied to rice at 50 percent heading to mimic drift, injury ranged from 5-25 percent.

Unlike paraquat, when glyphosate was applied near 50 percent heading, no visual injury symptoms were observed. Yield reductions compared to the untreated control were evident in all varieties and ranged from 7 to 26 percent for rice receiving paraquat (1.6 oz/ac) and from 5 to 31 percent for rice treated with glyphosate (3.2 oz/ac).

In general, yield reductions were similar within a variety between glyphosate and paraquat applications.

For trial 2, which evaluated different application timings, we observed similar results with paraquat and glyphosate as well as any tankmix that included paraquat (paraquat+chlorate; paraquat+Sharpen).

Drift rates of salflufenacil (0.2 oz/ac) or chlorate (6.4 oz/ac) did not reduce rice grain yield at any application timing in preliminary trials.

These preliminary data suggest we should plan carefully how we approach desiccation of our soybean fields that are close to rice fields.

As we prepare for harvest in 2017, let’s remember that even though rice may be nearing the date of draining and looks finished, it is still susceptible to off-target movement of herbicide.