A USA Rice trade delegation recently visited with Mexican customers to reassure them of their importance as a key market for U.S. rice.

Mexico has been the top market for U.S. rice both in volume and value for decades. We’ve gone from nearly 100 percent of Mexico’s import market at times to a low of 82 percent in 2014, and we have been over 90 percent since. Although we have had a few ups and downs, we’re on track for a record year this year. Simply put, Mexico is a market we rely on, and Mexico can count on us.

That was the message delivered firmly and consistently during a recent trade mission USA Rice organized to Mexico.

It’s always important to remind your customers you appreciate them, but we found it especially vital in our current political climate. President Donald Trump, who won the White House largely on waves of support from rural America—read “agricultural communities”—has said more than a few things about Mexico that has threatened to destabilize our countries’ deeply intertwined relationship.

In addition to controversial statements about Mexico, including an insistence that Mexico pay for an expanded border wall, the president also had harsh words about the North American Free Trade Agreement. He talked about everything from tearing it up to renegotiating the entire deal.

I likely don’t have to remind you that NAFTA has been pretty good for the American agriculture community, particularly rice.
We’ve worked aggressively in Washington and with others in the ag community to remind the president and his team that NAFTA isn’t altogether bad. And he’s listened.

Administration officials have publicly indicated that they understand how important NAFTA is to U.S. agriculture, and that as they work to update it, they will be careful not to undo parts that work well. And that’s us.

But all the rhetoric has created unease and frankly, some ill will toward us from south of the border. Where once Mexican consumers flocked to and sought out U.S. brands, we are hearing reports of them doing the reverse—going out of their way to avoid U.S. brands. Additionally, the Mexican government has now dropped its tariffs on rice to zero for many countries, opening the door for our Thai and Vietnamese competitors.

None of this works for us at all. And that’s where our trade mission was born.

Keeping Mexico the No. 1 export market 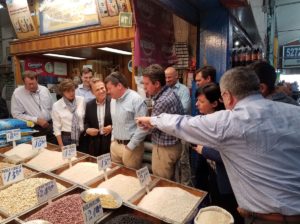 Late last month, our chairman, Brian King, led more than a dozen USA Rice representatives from up and down the supply chain on a mission to reassure our customers that not only do we value them, but that we are communicating the importance of our relationship to policymakers back home and that the White House is listening.

We visited with representatives of the Mexican milling industry, wholesalers, and both U.S. and Mexican government officials, and repeated our mantra: “Mexico is an important, reliable trade partner to us, and we are urging our government not to upset our relationship.”

It will take time to see what happens here, but I am confident we did the right thing. The organizations and individuals we met with were appreciative of our efforts. Our continuation of robust promotion programs in Mexico, with more than 300 annual events including cooking demonstrations at the retail level, seminars for chefs and media, restaurant promotions, cooking contests, sponsorship of regional rice festivals, the development of rice-specific cookbooks and magazines, and earned and paid media placements, also sends a strong message to our friends there.

It was a great honor to help lead this delegation, and it continues to be a great honor for us to count Mexico as a friend, ally, and now and forever, the top market for U.S. rice.

Wishing you all a wonderful and safe growing season.

Print & E-mail
Ag Policy exports mexico NAFTA trade 2017-05-15
Vicky
Previous: Be a good neighbor
Next: To fertilize or not to fertilize?