Be on the lookout for two new watergrass relatives 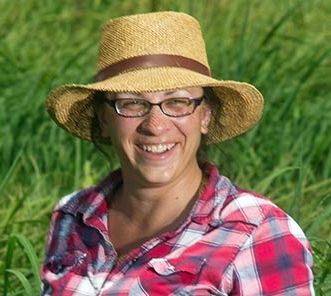 Weed control in California rice has become more complicated over the past few years, both due to increasing number of herbicide-resistant weeds as well as new weeds, including weedy rice and for some, winged-primrose willow. Just as we were beginning to think we were going to have a pause in new weed problems, we have a couple of new weed species to look out for this year.

The discovery of a new weed species came from a long string of seemingly unrelated events. It began in early 2017, when I summarized the data from the herbicide resistance testing program with the University of California Weed Science group.

I found that over the past several years, we had a large increase in the number of barnyardgrass (E. crus-galli) samples submitted for testing. We went from zero in 2014 to nine in 2015 to 35 in 2016. My colleagues and I speculated about the cause, but we had no clear ideas. 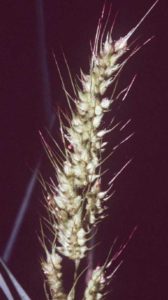 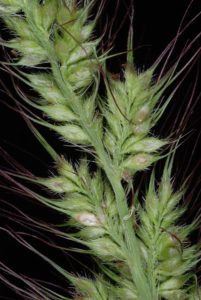 Then at a national weed science conference, I noticed a poster on Echinochloa spp. in rice fields in the Southern United States. There were two species on the poster, E. walteri and E. muricata, both of which were difficult to distinguish visually from barnyardgrass (E. crus-galli). I looked at the pictures and began to wonder if we might have these species in California rice fields.

Then in the summer of 2017, I received two farm calls from growers in two different counties concerning barnyardgrass that was impossible to control. Both growers had applied many different herbicides with different modes of action that when combined should have provided some control.

However, when I went to visit the fields, it appeared that the weeds were not even touched by the herbicides. At heading, the growers and pest control advisers (PCAs) for the corresponding fields collected plant specimens, which we sent to the University of California, Davis, Herbarium.

They confirmed that we did indeed have E. muricata in both fields. The infestation was widespread throughout both fields, not patchy, indicating that it had likely been there for a number of years. To get an initial idea of how widespread these two weed species are, we have grown out all of the submitted samples from the past several years to have them identified.

We also plan to do some genetic testing to determine if there is a non-visual way to distinguish between the three species (E. crus-galli, E. muricata and E. walteri).

We suspect, but have not yet confirmed, that these species may be tolerant to many of our rice herbicides. We are conducting further tests.

For now, we are asking all growers and PCAs to be on the lookout for these two species in 2018. In particular, if there is a large amount of Echinochloa spp. remaining in the field after all herbicides have been applied, it will be important to get the plants identified.

Please give your local UC rice adviser a call.