Arkansas appears headed toward a further increase in furrow-irrigated rice acres in 2019. This production practice is finding a substantial rotational fit for growers to save on land management costs, primarily associated with expenses related to tillage.

Ultimately, there are some important management considerations that go with this unique and evolving production practice compared to our traditional delayed-flood rice management. While we can save on some land management and rotational costs, we should also be prepared for a potential increase in input costs related to nitrogen (N) fertility and pest management.

Preliminary N management research in Arkansas has focused primarily on hybrid cultivars due to their blast-resistance and stress-tolerance packages, which make them more suitable for this system where increased stresses are expected. However, pureline varieties can be grown in this system but with an increased risk.

To date, our N trials for furrow-irrigated hybrid rice show that a number of strategies are viable options. We can go with the “spoon-feed” approach where we make four applications of 45 pounds of N every seven days beginning at the five-leaf stage. This has been a traditional approach that continues to work well.

However, the most consistent N strategy has been to apply 50 percent of typical preflood N rates at the five-leaf stage followed by the other 50 percent 10-14 days later, and then follow that with an additional 45 pounds of N about seven days later.

Sometimes the additional 45 pounds of N in the last application is not needed to maximize yield. This is why we recommend establishing a GreenSeeker reference plot in the upper and lower sections of the field to evaluate the need for this final application. Without these reference plots to assist in determining the rice plants N status, it is recommended you automatically make the application.

In addition to the N applications already mentioned, we continue to recommend the late boot N application. Recent work in flood-irrigated rice has shown that even at excessive preflood N rates, we continue to get a positive response from this application as increased milling yields, reduced lodging potential and slightly increased grain yield.

We will continue to evaluate and update recommendations for furrow-irrigated rice as we research this emerging production practice. For maximum efficiency and reduction of moisture-deficit stress to rice, it is recommended to use beds no wider than 30 inches on loam soils and no wider than 38-40 inches on clayey soils.

Some have had success with 60-inch beds on clays, but adequate irrigation capacity must exist to wick moisture completely through the beds. To facilitate this, ensure bed height is no greater than 4 inches from bottom of furrow to top of bed.
Good luck in 2019, and let us know if we can help. 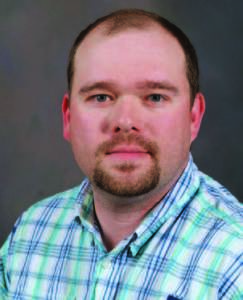 As I sit down to write this article on April 15, less than 30 percent of the total Mississippi rice acreage has been planted. This delay makes speculation on the 2019 rice season difficult, but as we trend toward a later-planted crop, disease management may play a crucial role in the later months.

Seed treatments are still vital for seedling disease prevention, even as germination periods decrease with the later-seeded rice crop. Sheath blight caused by the fungus Rhizoctonia solani is currently considered the most important disease for Mississippi producers in direct-seeded, delayed-flood environments.

This disease requires a multifaceted approach for proper management, including choosing less-susceptible cultivars, avoiding excess N fertilization and regularly scouting fields, especially where rice is grown either continuously or in 1:1 soybean rotations.

The proper use of fungicides has allowed for some control of this disease, but yield reductions can be significant if not controlled in a timely manner.

The increasing adoption of row rice in this area can have significant implications on rice disease management in Mississippi. With this shift in production technique, the lack of a permanent flood and N management strategies may greatly affect disease incidence and pathogen presence.

One of the most concerning diseases in row-rice acreage is rice blast. Rice blast is caused by the fungus Pyricularia grisea and is considered one of the most damaging rice diseases that occur in Mississippi.

One of the most effective control strategies is to maintain a flood of at least a 4-inch constant across a conventionally grown flooded field. However, this strategy becomes unfeasible in row-rice production. The possible increased incidence of this disease in row-rice systems is of major concern and must be properly managed and accounted for.

Rice blast management in row-rice systems begins with planting a cultivar with resistance, avoiding excessive N fertilization, planting early to avoid heavy blast pressure that can occur later in the season and scouting intensively so that a fungicide application can be made in a timely manner if blast is present. This timing often does not coincide with applications routinely made for sheath blight.

As heavy rains continue to delay planting, preparation for proper rice disease management of later-planted crops will be critical in the 2019 growing season.

Ratoon rice production is an economically important production practice along the Gulf Coast areas of Louisiana and Texas. Producers growing a second crop of rice strive to achieve a yield of one-third or higher of the main crop yield.

There are many things that a producer can do to ensure a high-yield potential in the ratoon crop. These include:

■ Planting a variety or hybrid that has been proven to be a good ratooning cultivar.

■ Planting the main crop within the recommended planting window.

■ Harvesting the main crop prior to Aug. 15.

■ Harvesting the main crop at the optimum grain moisture of 18-22 percent.

■ Fertilizing with 90 pounds (or more in some cases) of nitrogen fertilizer.

■ Fertilizing with P and K if the soil is limiting in one of these nutrients.

However, a practice that is not mandatory but that has consistently shown to increase yields in ratoon rice is post-harvest stubble management. It can increase ratoon yields by 5 barrels (810 pounds) per acre or more.

All stubble management practices, regardless of the implement used, increase ratoon yields by forcing the ratoon to come back from the crown node of the plant. Research has shown that ratoon panicles that originate from the crown node have bigger panicles, more grains per panicle and more filled grains per panicle compared with panicles originating from upper nodes from non-manipulated rice stubble.

If there is one non-mandatory practice that I would recommend over all others to increase ratoon rice yields, it would be to use post-harvest stubble management.

For this issue of Rice Farming, I will talk about ratoon production in Texas. According to the Texas Rice Crop Survey, 66 percent of Texas rice acreage was ratooned in 2018 with an average yield of 3,099 pounds per acre.

The most popular varieties ratooned were XL753, XL723, CL153 and Presidio. These stats show how important the ratoon crop is to Texas rice farmers. The percent of main crop acres ratooned continues to increase here.

In my research with insects, I have consistently found that if you properly manage your insect pests on the main crop, you will see a significant benefit on the ratoon crop. For instance, although rice water weevils do not directly attack the ratoon crop to any extent, control of this root-feeding pest on the main crop results in a more robust root system going into the second crop.

Another potential pest of the ratoon crop is fall armyworm, which can be easily controlled with foliar-applied registered insecticides. But if you apply Dermacor-X-100 to your seed, you can obtain good control of fall armyworm (and stem borers) attacking your ratoon crop. 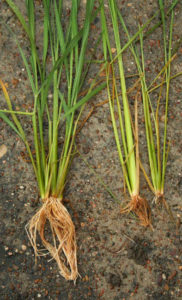 Other factors to consider regarding successful ratoon production are:

1. Plant early so your main crop is harvested before Aug. 15 (this is a guideline).

2. Try not to rut up fields during main crop harvest.

3. Usually, it’s best to apply N fertilizer just before you flood up your ratoon crop.

4. If you cut your main crop low, you may delay maturity a bit. But you will also improve uniformity and help control stem borers, which survive inside culms of the main crop.

5. Try to spread out your straw after main-crop harvest to remove windrows, which interfere with ratoon crop growth.

One last comment: As you know, we discovered the rice delphacid/planthopper attacking the ratoon crop in Texas in 2018. Be on the lookout for this exotic pest on both your main and ratoon crops. If you have any suspicions, contact me at 409-239-4265 or moway@aesrg.tamu.edu. 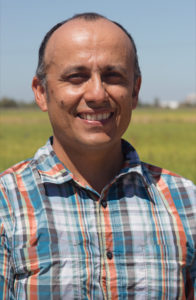 Kernel smut is not a new disease in California rice. It was first detected in the 1980s, and it has been present in rice fields since then without causing many problems. However, in the past few years, this fungal disease has become more widespread, mostly in the northern part of the Sacramento Valley, causing concern among growers and pest control advisers.

In the field, signs of the disease appear right before harvest and consist of masses of black spores that develop inside rice hulls, replacing the kernel. These masses of spores are more noticeable early in the morning, because they swell up with the dew.

During harvest, the spores are disturbed and contaminate equipment, grain and soil. The spores, called chlamydospores, survive in the soil over the winter and germinate after fields are flooded for seeding the following spring. 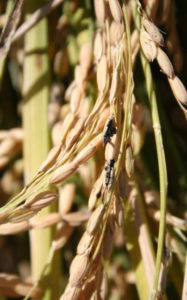 Signs of kernel smut appear right before harvest and consist of masses of black spores that develop inside rice hulls — photo by Dr. Luis Espino

Growers who have seen high levels of this disease in their fields have reported yield reductions of up to 10 percent. Research conducted in the past two years has shown that severe infections can result in reductions in milling quality and head rice yield. In some severe cases, milled kernels turned gray instead of white.

Kernel smut is favored by high nitrogen levels, which is why usually headlands with aqua ammonia overlaps tend to have more infected panicles. Of our varieties, long grains are much more susceptible than medium and short grains; out of the medium grains, M-209 seems to be the most susceptible.

Fungicides can be used to manage kernel smut. Products that contain propiconazole have activity against the disease, but they should be applied at mid-boot, not at the early heading stage used for control of other rice diseases.

The challenge is that by mid-boot, no signs of the disease are visible. Therefore, the decision to treat or not should be based on the field history. As a guideline, research has shown that when 40 to 60 percent of panicles are infected, reductions in milling yield can be expected.