Early season fertility is crucial to producing a profitable, sustainable rice crop. Of utmost importance is to take soil fertility samples as directed and send them to a reputable lab for analysis. If you have not done this, do it now.

If you plan to ratoon crop, you must include this option in your overall fertility management program. You should also contact your university rice researchers/Extension scientists for fertility guidelines specific to your variety, soil type, planting date, location and irrigation method.

Let me say from the outset that I’m an entomologist. When LSU AgCenter’s Don Groth and I did some experiments a few years ago, we found that increasing urea applied preflood or at panicle differentiation did not compensate for rice water weevil damage. So don’t apply urea to make up for weevil damage. The best option is to apply an insecticidal seed treatment.

Now that I have said that, let me give you a little primer on nitrogen volatilization and how it relates to rice N management. When urea is applied to soil, microbes in the soil release an enzyme called urease, which catalyzes the breakdown of urea to ammonium.

The ammonium is then converted to ammonia, which is a gas that escapes into the atmosphere. Thus, this volatilization process means your crop is losing N that you dearly paid for, and the escaped gas is polluting the atmosphere.

2. Incorporate urea by flushing or timely rain as soon after application as possible.

4. Conservation or no-till soils tend to have more organic matter, which the urease-producing microbes like, resulting in greater volatilization.

If you have trouble getting water across your field after a urea application, consider applying a urease inhibitor to your urea — especially if the time between urea application and a flush or flood is greater than three days.

I think most rice farmers in Texas use a urease inhibitor, and I think this a good practice because of Southeast Texas’ erratic weather. Another option is to apply urea by air over a period of time based on when paddies are projected to be flushed/flooded. Of course, this increases labor and possibly application costs. At any rate, efficient utilization of urea increases yields, saves money and helps the environment.

General weed control programs are often decided on before the season begins and are based on past weed species present in a field and past success or failures.

However, rice growers and consultants should always scout fields for weed species present and modify predetermined herbicide application plans depending on the species.

Identification of early season seedling weeds is often difficult due to their small size and similarity at first glance. Upon closer inspection, there are identifying features of many of these weeds that we can use to differentiate the seedlings.

There are a few tools I use to help me identify early season seedlings. They include a hand lens, the the publications “Schematic Diagram for Seedling Weed Identification in Rice” and “Rice Varieties and Management Tips.”

“Schematic Diagram for Seedling Weed Identification in Rice” is available free on the LSU AgCenter’s website (https://bit.ly/38YtWVr). In addition, a free laminated copy is available at all rice-producing parish AgCenter Extension offices. The lamination helps make the document waterproof.

The identification guide was put together by Dr. Eric Webster and his group, and it has been a tremendous tool for rice growers in all rice-producing states. By closely examining the seedling weeds present and following the publication’s decision tree, you can accurately determine the seedling weed.

Once you’ve identified the seedling weeds, use the “Rice Variety and Management Tips” to determine available herbicides. The 2020 RVMT publication is available here (https://bit.ly/391XL7F).

In the publication, “Table 10. Effectiveness of Selected Preplant and Preemergence Rice Herbicides on Certain Weeds,” can be used to see which herbicide combinations can be used to control the weed spectrum. This data table is updated each year by Webster.

When it comes to early season weed control, accurate determination of weed species and identifying what herbicides will control the species is critical. Be sure to get your hands on both publications for the 2020 growing season.

Keep them on the dash of your truck, and I promise they will be extremely valuable when it comes to weed control decisions in 2020.

Be on the lookout for alligatorweed 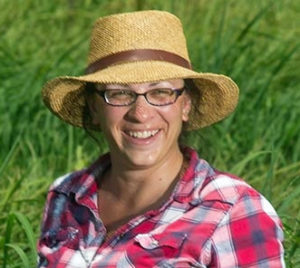 Alligatorweed, known scientifically as Alternanthera philoxeroides (Mart.) Griseb.), was spotted in California rice-growing counties along the edge of the Feather River in 2019. Eleven different locations/populations were found in Butte County, and one location was identified in Sutter County.

The exact locations for all of the populations of this aquatic weed can be found on Calflora.org. Prior to 2019, the farthest north alligatorweed had been found was in Sacramento County along the Sacramento River in 2017.

There have been populations in Southern California for a number of years — Los Angeles County since the 1940s and in Tulare and Kings counties since the 1960s.

Alligatorweed is commonly found throughout the southern United States, including in rice fields. It was introduced to the South from South America in the early 1900s, presumably in a boat ballast.

There are two currently registered California rice herbicides that can control it: Regiment (bispyribac-sodium) and Grandstand (triclopyr). It is a labeled weed for both herbicides, and rates and timings for its control can be found on the respective labels.

Alligatorweed grows well in shallow water in muddy areas. It can grow up to 3 feet tall and has hollow stems. The leaves are opposite on the stem, and the flowers are white and clover-like in appearance.

It flowers during the summer (May-October). In the United States, it does not reproduce by seed but is spread vegetatively. This means that pieces of the plant have to float along waterways in order to spread. Boats are a likely mechanism of movement from waterway to waterway.

Since it is an aquatic weed already known to infest rice fields in other parts of the United States, there is potential for it to move into rice fields in California.

As of writing of this article, there have not been any plants found in California rice fields.

Because the potential is there, however, it is a good idea to keep a lookout and be vigilant. If you suspect you have seen alligatorweed in your fields, please call your local pest control adviser or Cooperative Extension rice advisers.

Weed scientists with the University of Arkansas System Division of Agriculture have documented barnyardgrass populations with resistance to five herbicide modes of action. While this is not common, it does present an alarming development.
These populations are resistant to Group 2 (Newpath, Grasp and Regiment); Group 13 (Command); Group 7 (Propanil); Group 1 (Clincher and Ricestar); and Group 4 (Facet and Loyant) herbicides. In these situations, only Group 3 (Prowl) and Group 8 (Bolero) herbicides remain effective. The goal moving forward on the majority of acres is to prevent resistance levels from reaching this point.

The best way to control weeds in rice remains to prevent them from emerging in the first place. This means overlapping residual herbicides whenever possible. To achieve this, Command remains a foundational herbicide to be applied to virtually all acres.

Other key residual herbicides include Facet applied either with Command or overlapped shortly after and Prowl plus Bolero applied delayed preemergence. Use Newpath or Preface in Clearfield or FullPage fields, respectively.

Our postemergence herbicide options still remain effective in the majority of cases, but some resistance to at least one mode of action appears to be present in virtually all barnyardgrass populations. Post applications are expensive and can be greatly influenced by environmental conditions at the time of application — with lower control levels the result of weeds too large, inadequate soil moisture, or temperatures too high or low.

The goal remains to focus on a strong residual herbicide program. The key is that they be successfully activated by rainfall or flushing within a few days after application. Overlapping residuals approximately every two to three weeks, depending on conditions, is key to avoiding costly escapes later.

The earlier we can fertilize and flood, the less stress on our weed control program. In the situation of furrow-irrigated rice, the more frequent early season irrigations provide the opportunity to quickly activate and reactivate residual herbicides.

Regardless of the system, the goal is to get rice fertilized and growing as early as possible to outcompete weeds.

As we hope to soon emerge from another wet winter, we will be moving quickly to work fields and plant shortly thereafter. Be careful not to plant too far ahead of sprayers as residual herbicide programs and starting clean are vital to stay on top of rice weed management.

The landscape of rice production in Mississippi is dominated by the stale seedbed production system. This method of land preparation is chosen due to clay soils’ water-holding capacity where most of the state’s rice is grown.

With minimal to no-till occurring in the spring on Mississippi rice fields, early season weed control prior to planting is paramount to starting clean and getting ahead of problematic grassy weeds.

Dr. Jason Bond’s weed management program has dedicated immense time to develop strategies to combat these weeds early in the season to get our fields off to a great start.

Beginning with burndown, if glyphosate-resistant ryegrass is an issue, he suggests clethodim (12 to 16 ounces of Select Max or 6 to 8 ounces of 2-pound clethodim formulation). The only other reliable postemergence herbicide option for Italian ryegrass control is paraquat applied twice.

Similar to 2,4-D that we commonly use as a burndown to control broadleaf weeds, the rice-planting interval from application to seed in the ground is about 30 days for clethodim.

The plant-back or preplant intervals should be adhered to as we always see a field or two every year with some injury because we got in the field a little too quickly after application.

Barnyardgrass is the most problematic grassy weed in Mississippi and requires a constant, dedicated approach to keeping it at bay and limiting its yield-robbing potential. For barnyardgrass, Bond recommends starting clean and controlling it at planting.

In general, barnyardgrass control cannot occur too early. If we wait until grasses start to tiller before an application, we will be chasing them all year long. Well-timed, early season applications always provide the most consistent control.

As a final note, don’t forget the flood is one of the main weed-control strategies that we impart in a rice field. If we can get to flood clean and maintain it at adequate depth, we will be well on our way to clean fields at harvest.