Rice varieties and hybrids to consider for 2018

Choosing the right rice varieties and hybrids to plant is one of the first, and debatably, the most important decisions a farm manager makes each year. Agronomics, economics and field-by-field dynamics all play a large role in the decision-making process. To help, the Louisiana State University AgCenter publishes the “Rice Varieties and Management Tips” publication each year.

It includes a description of each rice variety and hybrid tested in the AgCenter’s variety evaluation program. The 2018 version is now available on the LSU AgCenter’s website (http://bit.ly/2o19ekI).

Rice growers will have a new variety, which contains the Provisia technology, to consider for the 2018 season. The variety, PVL01 marketed by Horizon Ag, is the first to be released for use in the Provisia rice system.

Provisia herbicide from BASF and PVL01 make up the Provisia Rice System. The Provisia technology is a powerful new tool that will extend the life of the Clearfield technology and can be used to clean up rice fields infested with Newpath-resistant red and weedy rice.

This is a rampant problem throughout Louisiana, and there is a tremendous need for this technology. In addition to the resistance to Provisia, PVL01 offers a very good grain appearance with very low chalk and a long slender grain that is more than 7 millimeters milled.

Like the first Clearfield variety released more than 15 years ago, the first Provisia variety has some agronomic challenges. The biggest is the drag in yield potential, approximately 10 percent, compared to other currently grown varieties.

There is a tremendous economic value associated with cleaning up an infested field and resurrecting the ability to use the Clearfield technology again. Not only should a grower review the one-year economic outlook when considering the use of this technology on a problem field in 2018, but he or she should weigh the economic long-term potential and sustainability of the field.

A field without a Newpath red or weedy rice resistance problem may not be the best fit for the first Provisia varietal release. Like we saw with the first Clearfield varieties, yield potential and disease resistance improved with subsequent releases, and rest assured that future Provisia releases will do the same. 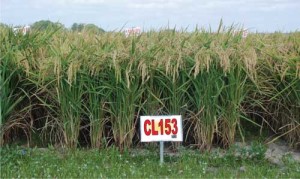 After observing CL153 in yield tests across the Southern rice-growing region, retired LSU AgCenter rice breeder Steve Linscombe says this variety appears to be very similar in yield potential to CL151 and has less chalk.

There are two hybrids — XP753 and XP760 — and seven conventional long grains that have been in our testing program and are recommended for Louisiana — Diamond, Catahoula, Cheniere, Cocodrie, LaKast, Mermentau and Roy J — for 2018.

The hybrids XP753 and XP760 have a definite yield advantage over all the conventional varieties and are both rated resistant to blast and Cercospora and moderately resistant to sheath blight and bacterial panicle blight.

The conventional varieties Cheniere and Mermentau will have the widest seed availability in Louisiana of all the conventional long grains. Both are semi-dwarfs, susceptible to sheath blight and reach 50 percent heading in about 80 days

Mermentau is susceptible to blast while Cheniere is considered moderately susceptible. Diamond and LaKast are early maturing conventional height varieties out of the Arkansas program that have shown good yield potential.

Of the three Louisiana varieties, CL151 has historically shown the highest yield potential, and CL153 has performed on par with CL151. CL153 has significantly lower chalk compared to CL151.

Clearfield long-grain hybrids tested in our program for a minimum of three years and recommended for Louisiana include CLXL745 and CLXL729. Both have shown superior first crop yield potential over the varieties.

CLXL745 and CLXL729 are both resistant to blast. CLXL729 is rated as moderately susceptible to sheath blight, while CLXL745 is rated as moderately resistant. Both have also shown good ratooning potential; however, CLXL729 has shown to have a slight ratoon yield advantage over CLXL745 even though it matures a couple days later than CLXL745.

Two conventional medium-grain varieties are recommended this year. Caffey and Jupiter are both short-stature lines averaging 36 inches in height at maturity. Both varieties have excellent yield potential and good milling quality.  Currently, Jupiter is the only Kellogg’s-approved medium-grain variety.

Ratoon crop production is possible with these varieties but typically is not as consistent as observed with most long grains. Caffey is rated resistant to blast, while Jupiter is rated susceptible. Both are rated moderately susceptible to sheath blight.

Titan is a new medium grain variety out of the Arkansas program. Titan has not met the minimum testing to be recommended in Louisiana; however, it has shown to have a very good yield potential and has improved blast resistance and is earlier maturing compared to Jupiter.

CL272 is the lone Clearfield medium grain currently recommended for 2018. This variety is a semi-dwarf variety with good yield potential and grain quality. CL272 is moderately susceptible to blast and susceptible to sheath blight.