Three to be inducted into Louisiana Ag Hall of Distinction 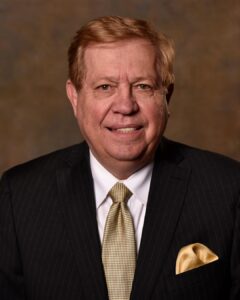 Paul “Jackie” Loewer has played a significant leadership role in the state’s rice industry. For his efforts, he will be inducted into the Louisiana Agriculture Hall of Distinction March 4 at the L’Auberge Hotel in Baton Rouge.

Three fixtures in Louisiana agriculture will be inducted into the Louisiana Agriculture Hall of Distinction during a ceremony at L’Auberge Hotel in Baton Rouge March 4.

The new inductees are former Louisiana Farm Bureau President Ronnie Anderson, of Ethel; sugarcane farmer John Gay, of Plaquemine; and Paul “Jackie” Loewer of Branch, a rice farmer who has been a strong advocate for the rice industry in state and national organizations.

A joint effort of the LSU AgCenter, Louisiana Radio Network, Louisiana Farm Bureau Federation and Louisiana Department of Agriculture and Forestry, the Louisiana Agriculture Hall of Distinction honors individuals who have made significant contributions to agriculture or agriculture-related industries. Previous inductees have represented farming, ranching, forestry, aquaculture, education and agribusiness.

Loewer has dedicated much of his career to helping the Louisiana and national rice industry maintain a sound foundation. He has played a significant role in the development of several national farm bills.

Loewer played an integral role with the Louisiana Rice Research Board, serving for 26 years, including 12 years as chairman. The board funds research initiatives aimed at increasing the sustainability of Louisiana’s rice farmers. His advocacy for the rice checkoff program has helped fund these efforts.

Anderson started his agricultural career in the dairy industry and transitioned to beef cattle. He has a herd of about 400 cattle, and he raises horses, hay and timber in both East Feliciana and West Feliciana parishes.

One of Anderson’s biggest contributions to agriculture is his tenure as Louisiana state president of Farm Bureau. He served 31 years and helped grow the organization from 67,000 members to nearly 150,000 today.

He received many awards throughout his career, including being named Man of the Year in Louisiana Agriculture by Progressive Farmer Magazine and induction into the LSU Alumni Hall of Distinction.

Gay farms more than 4,500 acres in Iberville Parish. His family has been involved in sugarcane for seven generations. Nearly every generation has held the highest level of leadership in the Louisiana sugarcane industry.

Gay is a practitioner of on-farm research at St. Louis Planting Company, the family farm. His work in fertility, drainage, erosion control and weed management have paid dividends for the state’s sugar industry. Twice during the past decade, Gay’s farm has produced more than 10,000 pounds of sugar per acre.

Variety research is considered by many in the sugarcane community as being the “lifeblood of the industry.” Gay has participated in variety trials on his farm, and the Gay family has funded a professorship at the LSU AgCenter Sugar Research Station devoted to this effort.

For more information regarding the Louisiana Agriculture Hall of Distinction event, contact Don Molino with the Louisiana Radio Network at 225-291-2727, ext. 210 or don@loiusianaradionetwork.com.