‘The Ron Burgundy of weeds’ 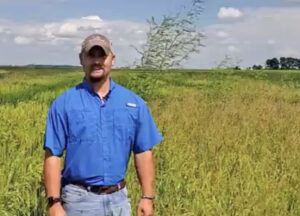 “Make sure to get those residuals out preemerge and overlap every 14-21 days,” he said. “And make sure we’re getting activation with plenty of water because that’s going to be key to successfully controlling your barnyardgrass season long.”

By not getting an upper hand on the grassy weed early, growers could be forced to play catch up with post applications the remainder of the season, often winding up with a costly, weedy mess, he said.

Butts made his comments during a recent University of Arkansas virtual winter rice production meeting.

“That’s really, really scary that it takes us that many more applications to successfully manage it if we missed with the first one, especially when we put cost to it,” Butts said.

The average cost to control barnyardgrass alone was $87.45 per acre, or 81% of total herbicide costs, based on the survey.

“I say all of that to basically come to the conclusion that barnyardgrass is a big deal,” he said. “It’s the Ron Burgundy of weeds, and it is driving our producers mad.” 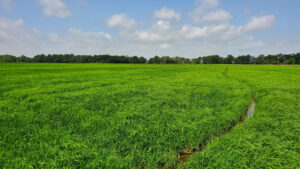 This photo of a rice field heavily infested with barnyardgrass, taken in June 2020, shows the repercussions of not getting a jump on the weed with overlapping residual preemergence treatments — photo by Tommy Butts, University of Arkansas

Command followed by Prowl + Bolero provided excellent barnyardgrass control without any post applications because of the sequential overlapping residuals.

His work also found Facet worked better on barnyardgrass when applied as a preemergence.

“Facet consistently shows up in small plot trials that it’s better as a pre, especially if we’re mixing it with Command up front than if we try to rely on it as an early post or as a post product,” Butts said. “It gives us better control pre and better flexibility because we get better control up front and more time for that second application.”

During two years of trials at two different locations, Butts said he saw the best overall weed control, including barnyardgrass, from a tankmix of Command, Bolero and League.

On first glance, growers may experience shock because it is not a cheap tankmix, he said.

“Although it was really expensive up front, it saved me at least one to two applications on the back end and ended up being a cheaper overall herbicide program just because we got that great residual control for that length of time,” Butts said.

If growers want to try it, he recommended doing so on a small scale or on a problematic field.

For effective weed control throughout the season, he recommended growers keep the mnemonic, SPORTS, in mind: