With the season winding down, follow these tips to restock crawfish ponds 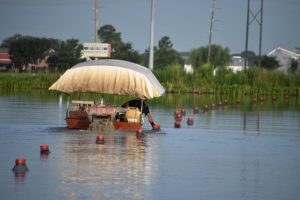 “Now and the next few weeks would be a good time to stock ponds,” said Mark Shirley, also a Louisiana Sea Grant agent. “Most of the rice crop is tall and dense enough for crawfish to hide under.”

But he said that in most cases, adding stock to an existing pond is not necessary. If the pond had mostly small peeler crawfish this season, adding additional stock will only make overcrowding worse and result in further stunting.

He said crawfish for stocking should have a 50-50 ratio of females to males.

In addition, he recommended avoiding white river crawfish and using only red swamp crawfish. He said buyers usually don’t want the white river species because of its appearance.

“As always, care should be taken to minimize stress during handling by keeping crawfish wet, in the shade, and not too hot or too cold, and do not use crawfish that have been stored in a cooler overnight,” Shirley said.

Crawfish used for stocking should be healthy, and Shirley advised producers to inspect fields where replacement crawfish are caught to make sure there are no dead or sickly crawfish that could indicate a problem with the devastating white spot syndrome virus (WSSV).

Shirley emphasized that humans are not affected by WSSV.

“This is a type of virus that affects only crustaceans,” he said.

It’s possible that WSSV can be found in surface water, he said, and it could be moved to other fields if affected water is redistributed. But he said it is not present in fresh well water.

He advised that traps, boats and other equipment used in ponds where WSSV is suspected should be pressure washed to remove debris and mud and allowed to dry in the sun for a week before moving the equipment from farm to farm or even to other ponds.

“Traps can simply be cleaned of mud and debris and then dried thoroughly in the sun,” he said. “Alternately, boats and traps can be power washed and then sprayed or scrubbed with a 5% bleach solution.”

Not much is known about WSSV. Shirley said the LSU AgCenter has obtained a grant to study the virus. The research was slated to start this year, but the ongoing coronavirus pandemic interfered with that plan.

“We do plan to pick up those efforts in the fall when the ponds are flooded,” he said.

The research will include a study of the virus’ genetics to determine if there have been any changes since the disease first hit Louisiana in 2007.

“That may be the reason why some fields are affected more than others,” he said, adding that it’s possible that some crawfish have developed immunity.

The research team is trying to determine how the virus gets into a pond in the first place. It could be spread by birds or insects or possibly brought in with the fish used as bait.

The virus, which was first detected in Asian shrimp farms, causes a white spot about the size of a pencil eraser on shrimp shells. That white spot is not found on the thicker shells of crawfish affected by the virus.

There is no solution for a pond once the virus is found.

Shirley said the first sign of the disease in a crawfish pond is a sudden decrease in production.

“Usually it’s a pretty drastic drop in the catch,” he said.

Large, dead crawfish will be found floating, which is not normal after a crawfish dies, he said.

“We’re still trying to figure out the mechanism of why they float,” he said.

Shirley said only about 20% of the ponds in south Louisiana are still in production. Decreased demand by restaurants caused many producers to drain ponds to plant rice, Shirley said. Now he said the catch from the Atchafalaya Basin is increasing.