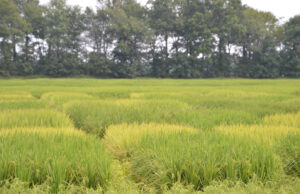 RiceTec is expanding its portfolio to include inbred rice lines – commonly called varieties — but the Alvin, Texas-based company plans to continue focusing on its core offerings of rice hybrids.

The first varieties could be on the market as early as 2022, depending on how they perform in university and company field trials.

“Hybrids will still be a major focus, but we know there’s a need for this in certain areas as far as the varietal market,” says Mason Wallace, RiceTec technical services manager. “The inbred piece is definitely new to us. We have some we’ve had in trials for the last four years.”

Tentatively planned for release in 2022 are two Max-Ace varieties and two Max-Ace hybrids, including one that has similar grain and yield potential to XP753.

The Max-Ace system has tolerance to over-the-top applications of HighCard, an ACCase herbicide from Adama that contains the active ingredient quizalofop. It is not yet registered for use on U.S. rice.

Rice breeders identified potential inbred candidates from breeding lines as they were selecting for hybrid parents, Wallace said.
Hybrids are made when two parents with dissimilar traits are crossed. The result is F1 progeny with hybrid vigor that frequently results in superior characteristics.

All of RiceTec’s inbred lines are long grain, and several have good grain quality characteristics.

For the 2021 season, RiceTec plans to have introductory seed volumes of two new FullPage hybrids: RT7421 FP and RT7523 FP, Wallace says. Both have lower chalk. 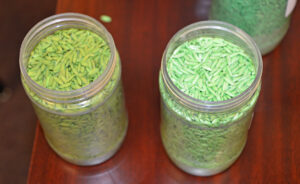 Several FullPage hybrids will come with Squad seed encrustment (right) that allows the pubescent seed to flow better through the planter.

“This will be our largest FullPage product this year,” said Van McNeely, RiceTec director of sales and technical services. “We saw higher demand, but we just didn’t have the supply this year, so we’re increasing the seed production.”

FullPage hybrids were developed to have tolerance to over-the-top applications of the IMI herbicides Preface and Postscript from Adama.

Several FullPage hybrids will come with Squad seed encrustment that allows the pubescent seed to flow better through the planter. As with other RiceTec hybrids, it also comes with a full complement of insecticide, fungicide, gibberellic acid and zinc seed treatments.

“One of the biggest things with the encrustment is we’re able to pump up the zinc rates,” Wallace says. “In high pH soils, low zinc may be an issue.”

RT7421 FP has similar agronomic characteristics to the conventional hybrid, RT7401, but with tolerance to over-the-top applications of Preface and Postscript herbicides.

RT7401 is a new low-chalk hybrid that has performed very well this year, sometimes out yielding the industry hybrid standard, XP753, Wallace says.

RT7523 FP is slightly shorter in stature and has agronomic characteristics similar to RT7501, except it also has tolerance to Preface and Postscript herbicides.

“We’re still evaluating 7401 and 7501,” McNeely said. “We’re looking at the historical performance and they’re not quite to the level of XP753, which is our benchmark on yield. But 7421 is doing extremely well this year.”