The U.S. Department of Agriculture released its much-anticipated June Acreage report this week. The most surprising aspect of the report was the lack of change from the March intentions.

Likely the report left traders with more questions than answers. In truth, the acreage picture may not begin to clear until August when we get a first look at Farm Service Agency certified acreage. 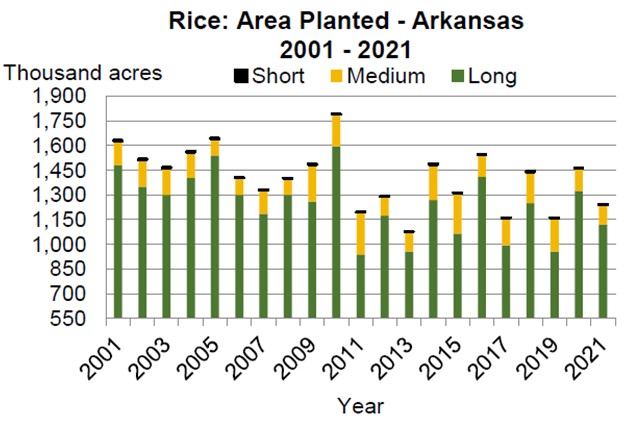 “All that work for a thousand acres?” That may be how they feel at NASS after collecting rice data over the past month. Historically speaking, this year’s March to June acreage adjustment was the smallest in recent memory.

Changes in acreage from March to June have ranged from a decline of 25,000 to 300,000, with an average decline of 164,000 acres. Given that, the rice market was caught off guard Wednesday by the meager 1,000 acre net change. The table below provides a state-by-state breakdown of long-grain March to June acreage changes.

As a reminder, the results of the June Acreage survey will be used in the production estimates for the upcoming July 12 WASDE (i.e. supply/demand report) and NASS crop production. How will this affect the 2021 balance sheet for long-grain?

At first glance, probably not very much. The June acreage report did include a projection for long-grain harvested acres of 2.041 million. That implies a planted/harvested acreage difference of 1.7% — the 10-year average. To calculate production, the key variable we don’t know is yield.

We can estimate that USDA has been using a national average yield for long-grain of 7,479 pounds (166.2 bu./ac.). If that continues to be the case, then the July production estimate would be 152.6 million cwt — slightly above the June estimate of 152.3 million.

Again, the key question here is yield. In the July WASDE, yield estimates are unlikely to change from previous months. In August we may begin to see some adjustment in yields.

Chicago rice futures have made a nice recovery off the mid-June lows. The September contract has retraced a full 50% of the slide from the May high at $14.21 to the recent low at $12.50.

In the chart below it’s hard to ignore the bullish flag that’s developed, which may be pointing to a retest of the May highs. But before getting too excited, keep in mind Wednesday’s acreage report was a disappointment with many in the trade expecting a lower acreage number and thus some reduction in crop size.

This may keep the rice market in a sideways range for a while longer. For certain though, it seems likely the market will simply shrug off the June Acreage and wait for more information. For example, the full impact on acres and yield from recent flooding in the state are still an unknown.

More clues about failed acres and prevented planting in all rice states will emerge in August with FSA’s certified acreage reporting. Until then, trading will focus on weather, crop conditions and export demand. Have a great Fourth of July!