Although the futures market disagreed and closed lower on Thursday, the June WASDE adjustments were somewhat favorable for rice. The “new crop” or 2021/22 long-grain ending stocks were reduced 2 million cwt to 30.1 million. This was due entirely to a 2 million cwt reduction in beginning stocks.

Old crop, 2020/21, ending stocks were lowered 2 million cwt from a combination of lower imports and higher exports for 2020/21. The U.S. Department of Agriculture noted lower import volumes from Asia in recent months and increased export sales and shipments to Venezuela.

There are eight reporting weeks left in the 2020/21 marketing year. This month’s increase in exports was a surprise as long-grain sales and shipments lag the previous year’s pace by 1% and 2%, respectively. 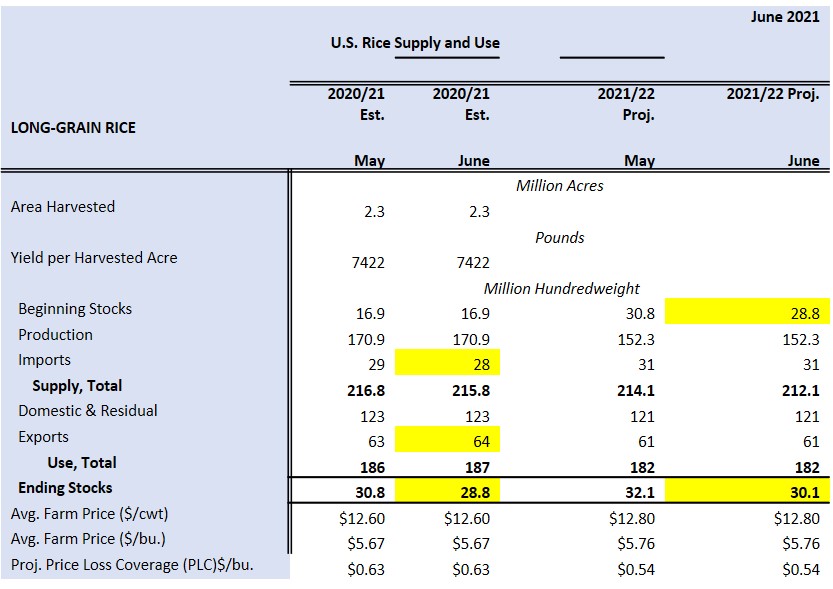 There were no changes this month to the old or new crop season-average farm prices for long-grain. The projected PLC payment for the 2020 crop remains at 63 cents per bushel.

The next release of the WASDE report will be July 12. It will include any acreage adjustments revealed in the June Acreage report. Recall U.S. growers intended to plant 2.078 million acres of long-grain this year (1.13 million in Arkansas).

These intentions were based on surveys conducted during the first two weeks of March. From early March to mid-May, November soybean futures pushed another $1.80/bu. higher and offered ample opportunities to forward price at $14. Competition from soybeans along with drawn out planting this spring has the trade looking for a steeper than 11% annual decline in 2021 rice acres.

In this week’s Crop Progress the U.S. rice crop condition improved slightly from the previous week to 75% good-to-excellent (G/E). Arkansas remained steady at 77% G/E. Crop conditions improved week-to-week in Louisiana and Missouri. Texas and Mississippi each slipped a point lower.

Diesel futures are back to pre-COVID levels, pushing past the January 2020 high at $2.1195. Global oil demand has increased 1.5 million barrels per day (bpd) over the past month and is currently 96.5 million bpd. This is projected to increase to 99 million bpd in August. Expect to see WTI crude oil progress toward $78 per barrel this summer.