Long time in the works 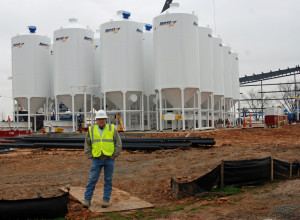 Chuck Wilson, director of the University of Arkansas’ Rice Research and Extension Center, is dwarfed by 1,300-bushel seed tanks.

Chuck Wilson, director of the University of Arkansas’ Rice Research and Extension Center near Stuttgart, wants to show off the new UA Foundation Seed Processing Facility in conjunction with the annual Rice Expo.

For that to happen, a lot of work will need to be completed between now and the ribbon cutting, tentatively planned for Aug. 9 — the day before the expo.

Ground was broken on the roughly 25,000-square-foot facility the day before the 2015 August Rice Expo, and Wilson says July 1 is the target to have the building completed.

“We got a little bit behind with the rain in November and December when we were trying to pour concrete, but they have made some of that up,” he says. 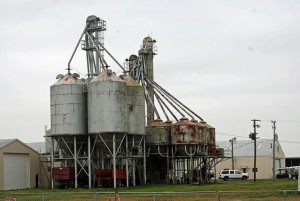 The facility is being built on university property just southeast of the RREC.

Unlike many construction projects where the exterior is completed first, followed by the interior, the seed plant is just the opposite. After the concrete was poured, the 20 seed tanks and seed cleaning equipment were installed before support beams were erected and roofing and exterior walls were put in place.

In addition to the seed tanks and seed cleaning equipment, the facility also will have warehouse space, mechanical and electrical rooms, cold storage and office space. Two docks will handle trucks, with one designed with a pit for large vehicles.

The university facility differs from commercial seed processing plants in that it will handle small volumes of numerous varieties, Wilson says. Each of the 20 tanks or bins can hold 1,300 bushels for a total of 26,000 bushels.

Commercial plants, on the other hand, tend to handle large volumes of a limited number of varieties. Wilson says it’s important that the university maintains control over the seed from field through processing to ensure the best quality possible.

The new facility has been at least 10 years in the works and will replace the aging 60-plus-year-old facility that Wilson says he hopes has processed its last bag of seed.

“So it has just been a matter of primarily getting people on board,” he says.

The rice board’s $2 million contribution comes from tariff rate quota funds generated for domestic rice research via the U.S.-Colombia Trade Promotion Agreement. The funds can only be used for research and are directed by the Arkansas Rice Research and Promotion Board.

Polk Stanley Wilcox of Little Rock, Ark., served as project architect, with KJWW of Des Moines, Iowa, providing engineering designs. The facility is being built by Flintco LLC, which is owned by Aberici Corp., a St. Louis-based contractor that has built several commercial seed plants.