A man of many hats

For Charley Mathews Jr., growing a high-quality rice crop profitably and efficiently is only part of the equation. The 49-year-old Marysville, Calif., producer says he also feels compelled to repay the industry for time investments made by others before him.

“The way I think about it, somebody sacrificed time to benefit me, so I figure I will sacrifice time as well to carry on that tradition,” he says. “There has to be somebody there who’s kind of a trustee.”

A member of the 1993 Rice Leadership Development Program, Mathews serves as co-vice-chairman of Farmers’ Rice Cooperative, a board member on the California Rice Commission and a California representative to USA Rice. That doesn’t count the numerous committees on which he serves within these groups.

“He thinks outside the box and has such broad powers to figure things out and reason things out,” Collins says. “He’s a pretty good thinker.”

Collins also marvels at how Mathews balances farming, a rice drying operation and leadership activities along with a family.

“I’m just amazed at how much of his life he puts into the rice industry,” Collins says.

A fifth-generation farmer who grew up in a rice-producing family, Mathews went out on his own in 2002. As with many young farmers, he says the first few years were tough.

But Mathews continued to slowly build his acreage and in 2015 harvested 800 acres of medium-grain M-206 as well as premium M-401. He also has partnered with three other rice growers to buy two rice driers near Marysville when the owners wanted to retire.

Not only do the two facilities handle the four partners’ crops, but they also commercially dry other growers’ rice and provide the partners more vertical integration, Mathews says.

“I grew up in a rice-drying business, and it was important to keep it open,” he says.
Shortly after a field is harvested, Mathews likes to chop and disk it as part of rice-straw management. Soon after, he floods the field to help with straw decomposition and to provide winter wildlife habitat.

Since California completed a phase-down of open-field rice straw burning in 1998, no more than 25 percent of total acreage can be burned annually and then only if growers have confirmed disease problems.

Despite concerns raised by many growers when state regulators were debating the issue in the 1990s, Mathews says he has not seen rice diseases increase in his fields that aren’t burned.

‘He does everything right’

Josh Cartwright, a pest control adviser with Bear River Supply Inc., Rio Oso, Calif., has worked with Mathews for about 10 years and points to Mathews’ attention to detail as a reason for his accomplishments.

“One of the keys to his success is excellent farm management,” Cartwright says.
Until this year, Mathews drove a combine and would note areas of weed escapes he saw from the cab for later discussion. With the addition of the two driers, his time has been diverted away from driving at harvest.

Throughout much of California’s rice-production region, several weeds have become resistant to a number of herbicides. But Mathews has been able to keep all but a little resistant watergrass and smallflower umbrella sedge in check through herbicide rotations and diligent water management.

“Charley is really good at water management,” Cartwright says. “It’s such a huge thing in weed management. What I like about him is he’s so good about controlling water depth and knows when to spray the weeds early when they’re small.

“He has a good rotation, and he uses what works and uses it correctly. He does everything right. He never rushes, makes sure he mixes correctly and is really thorough.”
Cartwright says he takes notes throughout the season, and he and Mathews meet before the next crop to develop a program. But Mathews typically has a plan in mind already.

“Not only is he a good farmer, but he’s helped me with my job,” Cartwright says. “I’ve been a PCA for 15 years. Not only do we bounce ideas off of each other, but he’s really helped me.”

Despite the drought, Mathews says the 2014 and 2015 growing seasons provided nearly ideal weather for producing rice. He is fortunate to receive water from the Browns Valley Irrigation District, which has senior water rights and is one of the last to receive cutbacks during a dry year. 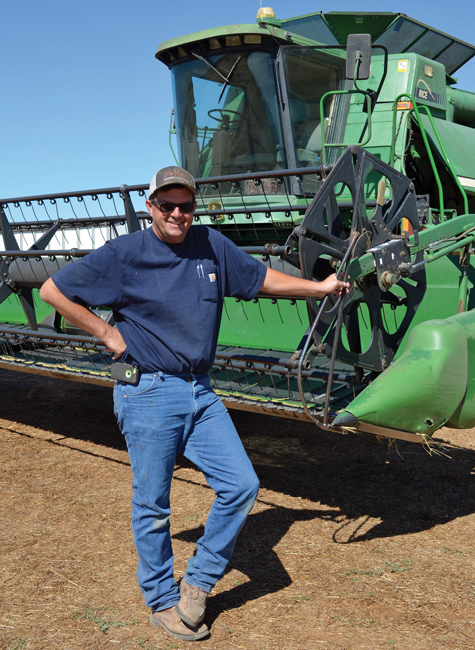 In 2015, Mathews expected to harvest about 98 hundredweight per acre of M-206 — a medium-grain developed by the California Cooperative Rice Research Foundation for areas with slightly cooler growing conditions.

He points to fellow growers in District 108 north of the Sacramento airport that routinely harvest more than 100 cwt per acre because they have slightly warmer weather and water.

But Mathews isn’t locked into M-206, either. Until this season, when he didn’t know whether he’d have water deliveries in a field near his house, Mathews had hosted a University of California Cooperative Extension rice variety trial there for several years.

“I learn something from every one of these trials,” Mathews says. “If I’m hosting one of these experiments on my ground, anything that is beneficial works for me, too.”

Of Drought and Export Trade

As both a grower and an industry leader, Mathews says he remains concerned about the drought and the state’s water future. Since 2013, when growers harvested about 562,000 acres of rice, production has dropped to an estimated 410,000 planted acres in 2015, according to the California Rice Commission.

Although much of the planting reductions are from the continuing drought and reduced water supplies, some are due to growers converting rice ground to permanent tree crops.

Even if rain and snow return to historical averages, planted rice acres likely won’t bounce back to levels earlier in the decade. And further erosion of rice production could affect the industry’s infrastructure, Mathews says.

But he also sees positives, especially with trade. Although the Trans-Pacific Partnership may not provide a large benefit to the California rice industry, potential trade with China could be a big boon.

“China has such a huge lack of trust in their own government in terms of the quality of food production that anything that says California is salable,” he says. “So we’re close on China, and I think that will be a huge market for us. And I think it will be a good market for us because it will be all private sales.”