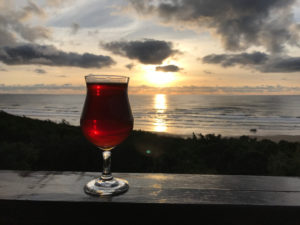 The winner of the inaugural PNW (Pacific Northwest) Gluten-Free Homebrewing Competition is a beer made with rice.

“The rice malts are responsible for the majority of the flavor composition,” Morris says

In addition to the three malts, Morris used rice hulls in the mash to filter the liquid out.

“Rice hulls are crucial to gluten-free homebrewing,” Morris says. Over time he’s learned to use a significant amount of rice in the grain mix so rice hulls are included naturally for filtration.

Morris had been a traditional homebrewer for seven years. His dad bought him his first homebrew kit and included an Amber Ale recipe with it. The beer style is his dad’s favorite.

Last year, Morris was diagnosed with Celiac Disease, an autoimmune disorder where ingestion of gluten results in small intestine damage. Gluten is a protein found in barley, a main ingredient in beer, as well as wheat, rye and triticale. The Celiac Disease Foundation estimates 1 in every 100 people worldwide have Celiac Disease and 2.5 million Americans are undiagnosed.

Morris considered giving up brewing. Then he learned about gluten-free beer.

Using the rice malts, Morris was able to brew a gluten-free Amber Ale that tasted like the original recipe. He beat out nine other entries to win.

Gluten-free beers were submitted from the Pacific Northwest, the Midwest, and Canada. Hopeful entries from overseas, including the United Kingdom and Australia, weren’t included due to shipping regulation issues.

The competition was hosted by Ground Breaker Brewing, a certified gluten-free brewery established in 2011. Ground Breaker is based in Portland and distributed in eight U.S. states, Canada and Japan. The brewery emphasizes research and development, and prioritizes sharing knowledge with the craft beer industry and home brewers.

“People are hungry for information about gluten-free beer,” says Ground Breaker’s Jesse Bufton. “The competition’s goal is to encourage quality in gluten-free brewing.”

Entries were required to be gluten-free naturally. Gluten-removed or gluten-reduced beers were not allowed.

In fact, Ground Breaker does not permit any gluten on its premises. Eight judges assessed the beers on aroma, flavor, mouth feel, appearance, and overall impression.

Ground Breaker will work with Morris to brew the beer and release it under the brewery’s label.