Better days ahead for Arkansas rice 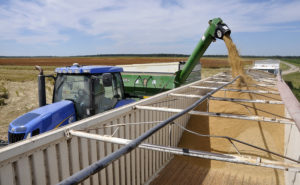 While 2019 was doom and gloom for rice producers, 2020 may be the year of the rebound for the state’s largest agricultural export, with total Arkansas rice acreage expected to increase 25% to nearly 1.5 million acres.

“Instead of a 35-year high, we now have long-grain ending stocks that are at their lowest in 16 years,” Stiles said.

Despite a record year for prevent planting, yields remained good.

Planting between March 21 and April 3 typically produces the best yields, said Jarrod Hardke, Extension rice agronomist for the Division of Agriculture. But those dates came and went last year, leaving rice producers with their slowest planting in 25 years.

“Our true summer happened in late August,” he said. “The majority of what affects milling issues depends on what happens after heading. Usually the later the plant, the better the head rice yields. In 2018, we saw the opposite, but this year we had some phenomenal millage yields.”

Currently, rice is grown in 40 of the state’s 75 counties, primarily in the eastern half of Arkansas. Counties in northeastern Arkansas account for the majority of production, led by Poinsett, Jackson and Lawrence counties.

Gemini 214 CL, Diamond and Jupiter will continue to be the most popular rice cultivars in 2020.

Low production last year helped avert a long-grain rice price collapse — and may have been the silver lining in the cloud. In May 2019, the U.S. Department of Agriculture forecast long-grain ending stocks to reach the highest level since the mid-1980s. At that time, rice futures prices were trading near $10 per hundredweight. By September, futures prices had climbed to $12 cwt.

Regarding 2020 inputs, seed costs for rice have remained mostly unchanged over the past year, and fertilizer prices are below early 2019 levels.

“The fact we haven’t seen sharp increases in the largest drivers of input costs works in favor of rice acreage this year,” Stiles said. “Recent political events in Iraq and Iran moved the energy markets significantly higher. How this will impact fuel costs is something we’re watching closely.”

Game changers in the offing

So what — besides weather — could be a potential game changer for rice in 2020?

If the “Phase 1” trade agreement with China includes significant agriculture commodity purchases, particularly in the first quarter of this year ahead of planting, that could move competing crops like corn and soybean prices to more attractive levels, Stiles said.

Also, if dry conditions in parts of Argentina and Brazil persist and production estimates start to decline, corn and soybean prices would get a lift from that as well.

Soybean prices, however, will have to increase a lot to steal rice acres. A $10 price level for soybeans would begin to get grower’s attention. November 2020 soybean futures have rallied over 50 cents in the past month and currently trade near $9.70 per bushel.