Ralph Gorrill was born in 1884 in Oakland, Calif., the county seat of Alameda County and a teeming agricultural region. In 1917, he put his engineering background to work by helping to lay out and construct what is now part of historic 99E Highway between Durham and Nelson.

While working on this project, a parcel of land caught Gorrill’s eye. Inspired by the rich, flatland soils as well as its access to Butte Creek and the new road, he purchased the initial 2,400 acres, named the property Gorrill Ranch, and the engineer turned rice farmer in 1918. With the help of Ernest Adams, his neighbor and renowned rice industry pioneer, Ralph Gorrill soon established a reputation as an innovative rice farmer.

Today, Gorrill Ranch is a fourth-generation family business that grows a variety of crops, including rice, prunes, almonds, walnuts and pecans. Throughout the rice industry, Gorrill Ranch is particularly well known for its premium quality rice.

“Although we produce a lot of medium grain rice just like the majority of California does, we also grow premium quality and specialty rice – high-end short grains that are prized in Japan and also used in making sushi,” says rice operations manager Marc Breckenridge. “Our rice acres typically are comprised of a combination of short and medium grain varieties.” 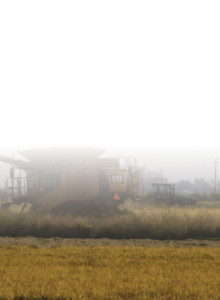 Calhikari was released as California’s first premium quality short grain variety and was first available for commercial production in 2001, according to the California Rice Research Board. It’s an early maturing semi-dwarf variety and exhibits a much greater yield potential and resistance to lodging than Japanese varieties, as stated in the Board’s report.

“Calhikari can average anywhere from 70 sacks (7,000 pounds) to 85-90 sacks on the high end,” Breckenridge says. “It’s a very strawheavy variety. But I say when the heads fall, that means it’s also a heavy crop.”

“Akita yields can range from 60 to a little over 70 sacks,” Breckenridge says. “Koshi yields are all over the board, anywhere from 50 to 70 sacks. Even though it is considered the highest quality rice, it’s a very finicky variety to grow, and no matter what you do, Koshi always lodges; it does not stand up. And when it lodges, it doesn’t lodge like most varieties that just fall. It rolls itself over, forming a braided type pattern, which means that harvesting this variety is a long, slow process.” 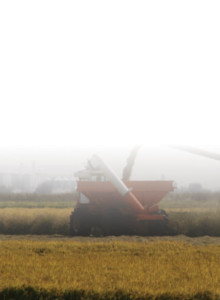 In addition to variety choices, water sources also are an important component of rice production at Gorrill Ranch. The operation has historical water rights to Butte Creek, which provides surface water for irrigation, and wells, which provide groundwater.

“Some years when water is good and we get a nice snowpack, we can pull our water from Butte Creek and supplement every now and then with wells,” Breckenridge says. “It’s a blessing when we are able to do that.”

Gorrill Ranch also belongs to the Western Canal Irrigation District, which deals mostly with rice and pulls its water from Lake Oroville, which is fed by the Feather River.

In 1918, Ralph Gorrill erected a wooden dam on Butte Creek to irrigate his rice crop. Since then, the dam has been rebuilt with the help of environmental groups, federal and state agencies and private partners. It also has been a contributor to the salmon restoration on Butte Creek.

The restoration efforts of the Butte Creek watershed by environmental groups, together with private landowners and state and federal agencies, is showing results.

“The restoration there I think has clearly had a measurable response,” said Rob Titus, a senior Department of Fish and Game environmental scientist, as quoted in “Salmon Resurgence in Butte County,” by Peter Fimrite, San Francisco Chronicle, May 6, 2008. The article stated that the fish count of Chinook salmon in 1987 was 14. The number counted in 1998 was 20,000.

Fimrite also reported, “The spring run in Butte Creek is doing exceptionally well. ‘For the fish, it’s a success story…,’” according to the California Department of Fish and Game’s Harry Morse.

The restoration efforts of the Butte Creek watershed by environmental groups, together with private landowners and state and federal agencies, is showing results.

The Butte County Revegetation and Restoration Project noted that during the period 1994 through 1997, several agricultural structures were removed, fish screens were installed and a new fish ladder was also installed. In addition, a minimum streamflow rate of 40 cubic feet per second (1.1 m3/s) is maintained during the summer months.

Breckenridge explains that cultural practices for the short grain and medium grain varieties are similar.

“Every year, we deal with grasses, sedges and broadleaves, and, unlike the South, we don’t have many disease and insect issues,” he says. “We do make one fungicide spray when the rice starts to head out to protect against, or suppress, aggregate sheath spot and stem rot.

“At planting, we also have algae issues that we treat with copper sulfate and other products,” Breckenridge adds. “Algae problems have a lot to do with your water source or with liquid starter fertilizer that is sprayed on top of the soil. Some of the components of starter fertilizer promote algae in the field.”

Carrying On The Legacy: Maintain The Land In A Sustainable Way 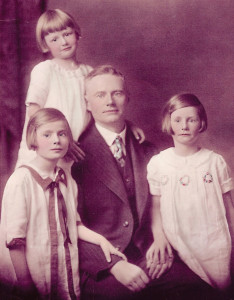 In 1918, Ralph Gorrill, an engineer by trade, purchased the land near Durham, Calif., that came to be known as Gorrill Ranch. According to his great-granddaughter Correen “Corrie” Nichols-Davis, Ralph liked the area so much that he built his home and raised his family there.

“He was very innovative in how he worked the land – surveying and leveling one section at a time – and developed the gravity-fed irrigation system that we still use today,” Corrie says. “It’s economical and environmentally efficient.”

After Ralph married Elizabeth (Lissie) Page in 1916, the couple had three daughters – Sally, Anne and Jane. Ralph’s three daughters continued Ralph’s legacy of innovation with large-scale engineering projects and additions to the physical plant. They diversified the rice operation with the purchase and development of tree crops, including prunes, almonds, walnuts and pecans.

Today, the fourth generation (or the “Cousins and Beyond Generation” – the 13 great-grandchildren of Ralph and Lissie) are assuming leadership roles at strategic levels, bringing new energy and complementary experience to the ranch.

“I was honored to have the opportunity to come back and work for the family farm,” says Corrie, managing partner and chairman of the board. “Danny Robinson is our president, CEO and overall ranch manager. I am part of the fourth generation whose goal is to carry on Ralph’s legacy of maintaining the land in a sustainable way. We are working on educating the fifth generation so that they will be in a position to be the next stewards of the ranch.”

Portions of this section were contributed by www.gorrillranch.com. Ralph Gorrill is pictured above with his three daughters. At left is Sally, who is Correen Nichols-Davis’ grandmother; Jane; and Anne.

When asked what he enjoys most about his work, Breckenridge says, “As rice operations manager at Gorrill Ranch, every day brings a new challenge and new reward. Working with the team we have on the ranch to grow the highest quality specialty short grain in the world makes the difficulty of growing some of these varieties a much easier task. Plus, who wouldn’t love to have California rice country as your office every day and to also call it home?”