Passion, preparedness and perseverance pay off 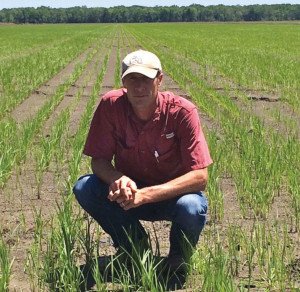 John Durand’s father was one of nine children raised in the agriculture industry. He farmed for a short time but left to start a construction company – the only sibling to break from the family business. However, Durand chose the path of generations before him. As a kid, he spent time each summer on the family farm where he rode equipment and helped his grandfather. He discovered a passion for the land and preferred to work with nature rather than build on it.

“My dad was happy as long as I was happy,” Durand says. “He told me, ‘It’s a rough road,’ but I stayed with it. I like the challenge and seeing the results of my work on the crop.”

Fast forward 15 years. Durand now farms 2,800 acres in Louisiana, including 1,000 rice acres. To get to where he is today, he learned through others in the industry and firsthand experiences.

“I had good reps who came to the farm and coached me,” he says. “I watched what my uncles and others were doing. I absorbed little pieces here and there and put them all together. A lot of it was trial and error.”

Durand’s farm has a history of red rice, which for a time he combated by planting a Clearfield variety the second year of his ricecrawfish rotation. In 2012, he saw an alternative. He introduced soybeans into his two-year rotation. As soybeans suppress more red rice each year, Durand plans to plant additional conventional rice varieties.

“Soybean prices were up, so we decided to try it on our idle land, and it did well,” Durand says. “We make some profit, but most important, it suppresses red rice. We have it tamed now, but if we let it get out of hand, it’ll bounce back and bite us.”

You can never truly be prepared because every crop year is different, Durand says. His rice harvest was good last year, but he attributes a slight yield loss to rushed planting because of wet weather. This year, planting started similar to last year. Early March was wet and cold, causing delays. While this can set June crops back, Durand also is concerned about his fall ratoon crop.

“A few years ago, we planted in the latter part of March,” Durand says. “There wasn’t yield damage on the first crop, but the ratoon crop was shy. The cold fronts came in October and November, causing plants to go dormant and not ripen.”

With the rice market down, Durand emphasizes the importance of developing a weed management plan that supports the highest yield potential.

“Things aren’t looking good for the market, but we go out there and do what we can to get the highest yields. We don’t cut back on herbicides and fertilizer because they make us money,” he says.

Durand targets yellow nutsedge, alligatorweed and barnyardgrass in his pre-flood application. Depending on which weeds are breaking, he applies Grasp Xtra or RebelEX herbicide.

“The spectrum of Grasp is very broad, and it controls barnyardgrass, our biggest enemy,” he says. “When it’s time for permanent flood, we’ll apply two ounces of Grasp or Grasp and Permit, and we’ll annihilate weeds that are starting to break as soon as possible.

“In the Clearfield system, we use the same practice, except we’ll apply Newpath with Grasp on our second application of Newpath. Normally, that’ll get everything out of the way because Command is doing a good job on the sprangletop.”

Since those days on his grandfather’s farm, Durand has seen major improvements in weed control. He’s impressed with the ability to produce more with less.

“The herbicides keep getting better,” Durand says. “In the past, we had a couple to choose from. Now we have the ability to use different modes of action to stay on top of weed control. There also are new varieties that help improve yield and milling quality to maximize productivity.”

As technology capabilities expand, growers can add more weed control methods to production. In the end, that reduces costs but not quality, Durand says.