Value found in knowledge of the land

At certain times of the year, gusty winds howl across California’s Sacramento Valley, known for its rich adobe clay soil and home to the Sutter Buttes, described by many as the smallest mountain range in the world. For generations, farmers have grown rice in this area of the state, and producer Frank Rehermann is no exception. 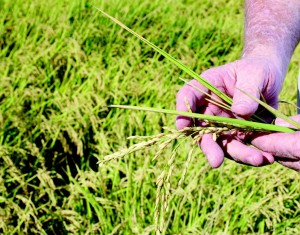 After enjoying a personal all-time high yield in 2014, Rehermann is hopeful that he will have an adequate water supply for the 2015 season. “The rain that we got in December was a good start, but the heaviest rainfall months are in January and February,” he says. “We are hopeful that we will experience at least a normal rainfall year, which would be somewhere in excess of 20 inches.”

In 1972, fresh from the Navy, Rehermann began his journey as a California rice farmer with the assistance of his father-in-law, Ron Harrington. One piece of property that they farmed was owned by the Righero brothers, who originally began the process of wrestling the unleveled ground with sloughs running through it into good, farmable rice fields. Later, using an old D-7, Rehermann continued straightening the levees throughout the property to achieve greater efficiency.

Today, he knows those fields well and has used that knowledge to help shape his rice production strategies. Rehermann has to be mobile because his operation is spread out, encompassing property at Live Oak, the Riceton area and the White Ranch – located on the other side of Richvale – that he began leasing from Minnie May White in 1973. In all, Rehermann farms 900 acres of rice, planting 50 percent to M-206 and the remainder to M-205.

M-206 And M-205
When he began farming rice in 1972, varieties were much different, Rehermann says. They were tall statured, and the early maturing ones were very susceptible to lodging. Rehermann recalls years when he harvested whole fields with rice flat on the ground.
“The good thing about M-205 is that it yields well and mills well,” he says. “It has all of those characteristics, plus it is more resistant to lodging than M-206. However, M-206 is also a good yielder and a good miller. When it’s ready to harvest, you best be ready because the moisture will drop pretty quickly. On the other hand, some M-205 may have a lot of sucker heads down low on the plant, and those take a long time to mature.

“I’ve planted 100 percent M-205 in the past at Live Oak, but it’s a couple degree days cooler down there than it is up here in Riceton,” Rehermann notes. “In my amateur
weather observations, I notice that the daily high in Oroville is always higher than it is in Marysville. And conversely, the overnight low is always higher in Oroville than it is in Marysville, so I had difficulty getting the M-205 to mature. I had to start harvesting down there, then move north about 25 miles to Riceton, which is one of the perils of being spread out. But we do have good equipment. I have a 2005 Lexion combine with rubber tracks that I bought in 2010. I love to see it pumping the rice out.” 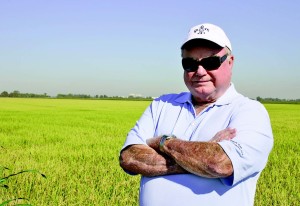 Following harvest, Rehermann floods some of his fields, like the one in the background, to attract waterfowl looking for a suitable habitat. “On a cold, winter morning, I certainly enjoy seeing and listening to some of the birds that fly in,” he says. “I am mindful that there are many people in this world who don’t get to witness something like that.”

Rehermann’s preferred moisture level for harvest is 18 percent, although he will go as high as 20 percent.

“When the moisture goes above 20 percent, the shrink rate and the drying charges are pretty severe,” he explains.

“If the rice is dry enough at my Riceton location, I haul it there,” he says. “I try to take dry rice to BUCRA and the greener rice to Richvale. Either location is a very short haul. That’s a big advantage of being in this area. Another advantage of being located along the highway is if we get inclement weather, we are closer to the road. That’s why I generally like to start harvesting in the north and work my way down. “It’s the little things that you pick up over the years from having experienced them,” he adds.

Incorporating Rice Straw
In addition to improved varieties, Rehermann says another game changer for California rice production was the practice of incorporating rice straw into the ground in the fall instead of burning all of the fields.

In 1991, the Connelly-Areias-Chandler Rice Straw Burn Act was passed, which amounted to a phasedown from burning 100 percent of your rice straw to 25 percent of what you grow based on the state’s acres of production.

“I can’t burn more than 25 percent of my acres, and I have a difficult time burning that because I still have to meet the other requirements, such as designated burn days and my place on the burn list,” Rehermann says. “In the fall of the year, the number of burn days granted by the state is reduced quite a bit from what is allowed in the spring because of air quality considerations. In 2014, I burnt a small field, which is nowhere near 25 percent of what I grow. But that’s fair. The law applies to everybody, so I am not unique in this regard.”

In order to properly prepare a dry seedbed in the spring, Rehermann typically makes six tillage trips across the field for a total cost of about $100 per acre. Although it’s an expensive process, the better job you can do of getting the straw incorporated in the fall, the less you have to deal with it in the spring, he points out.

“It’s tough stuff,” Rehermann says. “But after the straw winters over and the seedbed is prepared, most of the time you hardly notice that it is there. However, this practice sometimes affects my production strategy in that it causes the heavy clay soil to stay wetter in the spring, which can delay planting a little more than normal.”

A Strong Finish
Toward the end of September as the 2014 season drew to a close, Rehermann’s Lexion combine began cutting swaths across the fields in conditions described as “perfect rice harvest weather.”

“We had an excellent crop,” Rehermann says. “The state average yield was high, my personal average was an all-time high, and the quality was great. The 2014 season turned out very well, especially when viewed against the backdrop of our spring concerns of not having enough water to produce a crop.”

As Rehermann looks forward to his 43rd rice-growing season, he notes that through the years he has enjoyed the support of his wife, Judy, a farmer’s daughter who is now a schoolteacher. A fan of the blues, Rehermann also looks forward to making a trip to the Mississippi Delta to see where it all began. And he will be the first to say that his years of experience have not discouraged him, but rather inspired him and taught him to do what he does successfully to make a living in the Sacramento Valley.

“Everything has its upside and its downside, and rice farming is no exception,” Rehermann says. “But it’s something I love to do, and life goes on.”